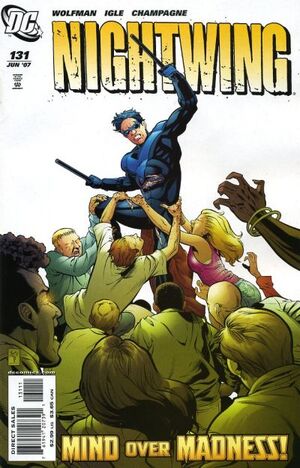 Appearing in "Bride and Groom, Part Three: The Engagement"Edit

Synopsis for "Bride and Groom, Part Three: The Engagement"Edit

1689 - Tituba, likely an African slave, gives birth to her daughter, Violet. Present is John, a Native American and possibly the father, as well as an unnamed African woman who is chanting throughout the birth. The woman's eyes are glowing and claims the world will soon learn how special she is.

1692 - Four young girls, seemingly possessed, dance naked around a fire. There are suspicions that the girls are witches but, when Mister Parris confronts one of the girls, Tituba, holding and smiling at 3-year old Violet, claims to be the witch and that there is "no one else to blame."

Retrieved from "https://heykidscomics.fandom.com/wiki/Nightwing_Vol_2_131?oldid=1444637"
Community content is available under CC-BY-SA unless otherwise noted.