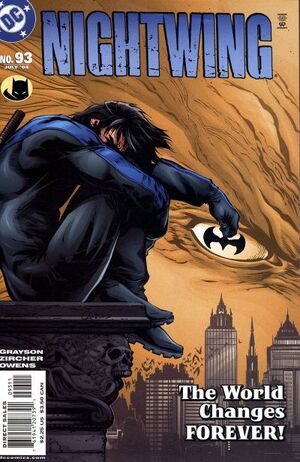 That's the secret, the essential truth of your nature. You could take every beating I dish out. You might even enjoy them. You have absolutely no regard for your personal safety. But the people around you -- well, that's a different matter. Isn't it? I'll take out the people you care about -- hell, even strangers you stand next to on the street -- you won't be able to shake someone's hand without marking them for death. Do you like being alone, Dick? I'll make sure you can't save any of them. Loved one by loved one, innocent by innocent... it'll never stop. I'm never going to stop. I can keep this up forever.

Nightwing faces a great personal crisis. Blockbuster has discovered his identity as Dick Grayson, and he has been compromised. On the rooftop of the Blüdhaven Police Department, Captain Rohrbach calls him with a great signal in the sky. He appears, and she offers Grayson his old position as a cop back, with his badge and his gun, but he declines and swings off into the night. He confronts reporter Maxine Michaels in her apartment, demanding to know how she could put so many lives in danger through her carelessness. She insists that she did not mean to help Desmond discover his secrets, it was an accident, and bound to happen anyway the way he lives his life. In mid-sentence, she is brutally shot through the head.

Blockbuster bursts in through the window. He casually remarks that he is tying up loose ends. Now that the two of them are in the same room together, he takes the opportunity to lecture Dick on what their future together will be like. Nightwing, furious, asks Desmond why he shouldn't just kill him right there. The crimelord smiles, and tells him there is absolutely no reason not to. But he knows Grayson intimately, and is going to give him a fate worse than death. Nightwing is driven by his concern for others, way past his own instincts of self-preservation. He takes beating after beating, putting himself in harm's way, to save the people he loves. The best way to strike at him is to strike at the people he has sworn to protect. Blockbuster promises to murder everyone Nightwing has ever cared about. Not stopping there, he promises to murder anyone that Dick Grayson knows, or even interacts with. People will be gunned down for simply walking past him on the street. Every single person he acknowledges in any way will be marked for murder, and his very presence will be as a pariah of death. Throughout the speech, Nightwing is completely kicking the shit out of Blockbuster. He is mortified, enraged, and quaking with anger and hatred over the things this villain has taken from him. At the climax, he throws him down a full flight of stairs, already covered in blood from the vicious beating.

Tarantula arrives with a gun, while Nightwing is gripping his nemesis. She tells him that all he has to do is move out of the way, and she will take care of it. Blockbuster, laughs, and tells her that she's foolish for thinking he would ever allow her to take a life. Even the life of his worst enemy is more important to him than his own. Tormented and driven to the absolute limits by the villain, Dick thinks about it and realizes he has little choice. It will never end, as long as Blockbuster is alive. Desperate and driven to the absolute brink of his own sanity, he drops him to the ground, and walks away. Tarantula takes steady aim with her handgun, and blows the bastard's brains out. Blood splatters all over the stairwell. Seeing his own hands covered with blood, Dick is horrified at what he's done... what he's allowed to happen. He starts going into shock, feeling unable to breathe, and stumbling onto the rooftop. Feeling that he's completely failed as a hero, failed Batman, failed Catalina, and most importantly failed himself. As he has a complete emotional breakdown, crying in the rain, numb with pain, Tarantula gently comforts him. Then she straddles him, and he tells her to stop but is physically unable to resist. She has sexual intercourse with him, taking advantage of his temporary mental condition. As the rain continues to shower down over Blüdhaven, she tells him "he can't hurt us anymore."

Retrieved from "https://heykidscomics.fandom.com/wiki/Nightwing_Vol_2_93?oldid=1568690"
Community content is available under CC-BY-SA unless otherwise noted.