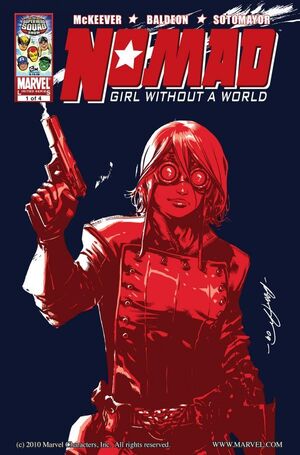 In her world, RIKKI BARNES was the modern-day BUCKY, teen sidekick to CAPTAIN AMERICA. In this world, the Cap she knew is dead, she never existed, and very little else is as she remembers. With no home, no income and no legal identity, what's a girl to do? How about tracking down the new Cap, reconnecting with her brother, and running afoul of the SECRET EMPIRE? Sounds like a plan to us!

Retrieved from "https://heykidscomics.fandom.com/wiki/Nomad:_Girl_Without_a_World_Vol_1_1?oldid=1657640"
Community content is available under CC-BY-SA unless otherwise noted.