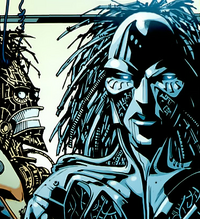 Origin
Every kind of mutant not originated from Homo sapiens

Place of Birth
Mostly on Earth, but exist among many species and therefore on many worlds
First appearance
Unknown

In addition to humans, genetic mutation has also been observed in many non-human species. These include, but are not limited to, extraterrestrials (Arcturans, Brood, Centaurians, Fomalhauti, Kree, Landlaks, Skrulls), genetic off shoots of humanity (Atlanteans, Inhumans, Eternals), and robotic beings (Danger[1], Wild Sentinels[2]). Mutation has even been observed in non sentient or semi sentient animals such as dinosaurs, crustaceans (Don the Lobster), and mammals (cats).

These individuals are not technically all Homo superior, but they are mutants to an extent, with a biological signification or not. For example, Danger is, according to Emma Frost and Armor, a "mutant program", the Mutant Skrulls are designated as "K-Class Deviant Skrulls", Thanos is a Titanian Eternal born with a Deviant gene (also called Deviant Syndrome). Karma and Kitty Pryde even stated that the Wild Sentinels from the Amazon Belle who attacked them in Chicago, were sentinels capable of evolution, "a mutant" added Xi'an.[2]

Some mutants have been detected by X-factor detection devices as mutants, although being obviously not Homo superior. No explanation has been given to why those devices can detect non-human mutants.

Ariel, was designated by the miniaturized Cerebro as a mutant,[3] as well as Moon-Boy and Devil Dinosaur.[4]

Charles Xavier was able to track the Beyonder using the Cerebro.[5] It is unclear if that means his mutation was detectable by Cerebro, or if he tracked his presence.

The mutant cat encountered by Henry McCoy was detected by a Cerebra.[6]

The artificial mutants created by Erich Paine were also detected by Cerebra.[7]

Even as a scrambled energy signature, Cerebra was later able to detect Ariel.[8]

Broo the Brood was detected by Cerebra (more exactly, his signal disappeared when he seemingly died).[9] It is unknown if it was his mutant signature, or a recorded signature.

Xavier was able to use Cerebra to detect Atlanteans, stating that their origin was a form of mutation from humanity.[10]

Ultra-Girl was tracked and attacked by a Sentinel who was tracking her, classifying her as a "V factor mutant".[11] It is still unclear if she is an alien or a hybrid mutant.[12]

Crosta, an Atlantean mutant, was stated to be a mutant by Juston's Sentinel.[13]

The Sentinel Mk II Number Two, a Sentinel mutant, was detected as such by its fellow Sentinels.[14]

The Moloid Val-Or was stated by Caliban's X-Factor detection to be a mutant.[15]

Charles Xavier was able to sense the Beyonder's mutation using his telepathy.[5]

The Kitten grafted a sample of his X-Gene by Doctor Nemesis was also detected by the Hub drones, logical given the fact that he was carrying human mutant DNA.[16]

In Earth-92131, the Shi'ar were able to follow the X-Brood by tracking their "mutant energy signature" with their scanners.[17]

At first, Xavier was able to use Cerebra to detect Atlanteans, stating that their origin was a kind of mutation from humanity.[10]

Among the Atlanteans (Homo mermanus), there are several powered being sometimes referred to by the term mutant.

The exact biological truth about those so-called mutants is for now unknown, such as if they are only random unrelated mutates, or if they formed one or multiple biological unities by themselves, and if it is, what is the cause of their mutations, as the X-Gene for Homo sapiens. Few of them were also confirmed as mutants. Crosta was stated to be (by Juston's Sentinel)[13]

Extra-dimensional and temporal travel have shown Atlantean mutants, such Relur, the Human Torch of 2099 and the alternate Namora and Attuma from Earth-2189.[18]
Also see the list of list of confirmed Atlantean Mutants.

Not to be confused with the frequent mutants present into the Atlantean/Human Hybrids population through the Multiverse.

The only one known "mutant Inhuman" is Devlor,[20] who was stated to be different from his kind because of his shapeshifting abilities, rare among his kind.[21]

For a time, it was believed that the Beyonder was also a mutant Inhuman who went through the Terrigen Mist with a genetic anomaly, something happened, awakening a near-omnipotent potential, and erasing him from his kind's memories.[5] Charles Xavier was able to sense his mutation using his telepathy, and years later to track him using the Cerebro.[5] It unclear if that means his (faked) mutation was detectable by Cerebro, or if he tracked his presence. That Inhuman status was determined to be a joke played by him to supposedly mess with the heroes of Earth who tried to determine what he was but it was nothing but a shenanigan on his part.[22]

Also see the list of mutants evolved from Moloids.

Avia was considered a Mutant among the Nhu'Ghari.[25]

Also see the list of mutants evolved from Nhu'Ghari.

Martinex was considered to be a possible Pluvian mutant,[26] having undergone a mutation,[27] a change who could be the result of a Latent mutant gene or a natural evolutionary step.[28]

Also see the list of mutants possibly evolved from Pluvians.

Animal and others Earthlings species

Said earlier, the Multiverse is full of curiosities, and among them, the alternate schemas of evolution, generating human societies dominated by evolved animals: dogs, apes, dinosaurs, insects. The illogical characteristics of the Multiverse made that several features coincide between the different universes, mostly about some beings powers, names and general appearances:

Also see the list of mutants evolved from canines or lupines.

Not to be confused with the Lupine Mutants, a false species human mutant that was supposed to allegedly have evolved from canines (the Lupine, or Lupus sapiens).

Also see the list of mutants evolved from simians.

Also see the list of mutants evolved from insects (or presumed to be).

At some point, Byrrah enslaved giant Mutant Crabs[31] with superhuman strength.[32] They were nurtured by radioactive oil.[31]

Don the Lobster was a lobster with blue coloration,[33] seemingly his only mutant feature.

Experimenting on bees, Swarm mutated them into mutate or mutant killer bees, forming his own body.[34]

In Earth-9591, Peter Parker was bitten by a deadly radioactive spider, that inoculated him with a mutant virus.[36]

A few cases of mutant cats have been witnessed:

As far, the other cases of feline mutants were artificials:

Both mutant cat and mutant lion were detected by Cerebra,[6][7] while Kitten was in fact inoculated X-Genes for him to be detected as a human mutant by the Hub drones, as he was carrying human mutant DNA.[16]

Also see the list of mutants evolved from felines.

A lie from Romulus, from Not properly non-humans, the Lupine (or Lupus sapiens) were allegedly humans who evolved from canines instead of primates. Some mutants were supposed to be from that species.[40]

(In some way, they could had be considered kind as "non-humans")

Additionally to alternate Earths, some simian mutants are also artificial, born from experimentation performed by Erich Paine and one of his creation, a Mutant Baboon. Among them Baboon, Orang-Outans, Gorillas... Paine's artificial mutants were detected by Cerebra.[7]

Mutants have also evolved from man-apes, with the case of Moon-Boy.

Also see the list of mutants evolved from simians.

Additionally to alternate Earths, some simian mutants are also artificial, born from experimentation performed by Erich Paine and one of his creation, a Mutant Baboon. Paine's artificial mutants were detected by Cerebra.[7]

Natural reptilians exist among the Savage Land Hauk'ka species, and from Dinosaurs, with the case of the Devil Dinosaur.

Slaymaster once used a giant mutant Gila monster with a venom faster and deadlier than the common's.[42] The origin of that beast is unknown.

Thomas Samuels was once infected by a mutant strain of polio, crippling him.[43][44]

The virus (named Virusplague by Warlock) created by the Ani-Mator to replicate himself was considered to have mutated beyond its original genetic remit, and was even stated to be a mutant by Cypher.[46]

While fighting the A.I.M.-Developed Viruses, Monet highlighted that those artificially created viruses had undergone an unplanned evolution: a mutation. She found it ironic that X-Men would be fighting such beings.[47]

In Earth-9591, Peter Parker was bitten by a deadly radioactive spider, that inoculated him with a mutant virus. Himself transmitted it to Philip Sheldon. This virus caused the former to develop a rash all over his body while the later died of it.[36]

In a fictitious tale largely inspired from her life, Katie Power mentioned that her house had suffered a mutant mold infestation.[48]
It is unknown if this mutant mold is part of the truth, or if it was added to the tale.

Many species through space have develop their own mutant races.

The beings deemed as robotic mutants are more or less considered as such:

Metaphorically or not, the Sentinels ironically developed their own mutants:

There is other cases of mutant Sentinels, who won't be counted as part of those and haven't been mentioned as mutant sentinel, like:

All those cases are closer of some kind of mutant/Sentinel hybrids than of mutant Sentinels.

Additionally to the dominant society evolved from dogs, apes of dinosaurs having evolved mimicking the humans civilizations, the Multiverse have been proved to be full of other type of mutant curiosities.

For examples, trans-dimensional travels have shown the ten evil Xavier, ten versions of Charles Xavier including an Acanti-like Xavier[54] (allegedly Charles who became to an Acanti),[55] a mutant demon[56] and a a giant squid-like mutant.[57]

The nature of the Multiverse making virtually everything possible create the possibility of amounts of non-humans mutants such as the few "Xaviers" shown.

Variable for most of the mutants.
Able from understand and express sentiments such as compassion for the Brood and Technarchs.

Variable. Intolerance and hatred from their main culture.