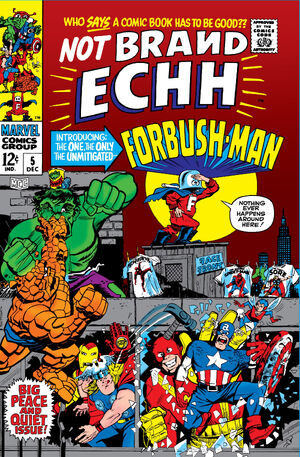 Appearing in "The Origin of Forbush-Man"Edit

Synopsis for "The Origin of Forbush-Man"Edit

Irving Forbush, a low-level employee at Marble Comics realizes his dream of being a superhero.

Appearing in "The Revengers Vs. Charlie America"Edit

Synopsis for "The Revengers Vs. Charlie America"Edit

Satirizes the events of Avengers #4 when the four remaining original Avengers discovered Captain America floating in a block of ice.

Appearing in "The Ever-lovin' Thung Vs. The Inedible Bulk"Edit

Synopsis for "The Ever-lovin' Thung Vs. The Inedible Bulk"Edit

The Thung battles the Bulk when he suspects the Bulk of "tryin' to beat my time" with his girlfriend, Anemia. This is a loose parody of Fantastic Four #25-26, though it also employs elements of the Thing's bout with the Silver Surfer from Fantastic Four #55.

Although Forbush Man first appeared on the cover of Not Brand Echh #1, this is his first time actually appearing within a story.

Retrieved from "https://heykidscomics.fandom.com/wiki/Not_Brand_Echh_Vol_1_5?oldid=1448820"
Community content is available under CC-BY-SA unless otherwise noted.