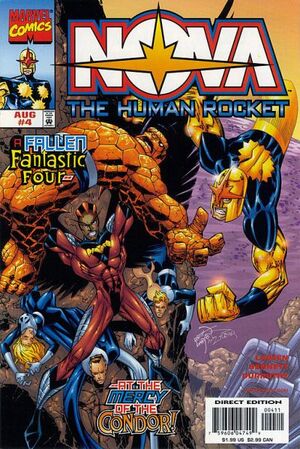 Appearing in "The Condor Strikes!"Edit

Synopsis for "The Condor Strikes!"Edit

The story begins with Nova battling Quicksand, who proves to be a formidable foe for Nova. However, Nova finally prevails by turning Quicksand into glass. Later, Condor sees that Nova is going to visit Reed Richards. He follows and while Reed Richards is running a test on Nova, Condor attacks and quickly stuns Mr. Fantastic into unconsciouness. The Invisible Woman tries to stop Condor by placing an air bubble around his head. However, he counters by buffeting Susan Storm with deadly sound waves and the blonde girl collapses unconscious, just like her husband. The Thing and the Human Torch attack Condor and while they remain standing, so does he. Finally it is Nova who defeats Condor by grabbing his wrist weapons and using them against him.

Retrieved from "https://heykidscomics.fandom.com/wiki/Nova_Vol_3_4?oldid=1448877"
Community content is available under CC-BY-SA unless otherwise noted.