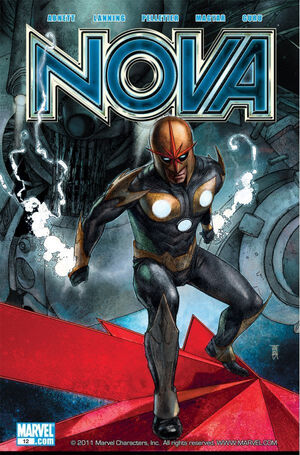 A massive siredam has been drawn to the signal made from the Babel Spire Drax and Gamora are trapped in. And it's here to find Tyro and kill him. Tyro is half-hearted to go and fight the siredam, but Warlock insists that he flee instead, while he holds off the siredam. But when he hears that Nova has the entirety of the Nova Force in him, he uses all of his lifeglow to cure the transmode virus that is attempting to consume him, sacrificing his life in process. Back to full power, Nova engages the siredam, but even the Nova Force itself can't defeat an entity of such magnitude. He only succeeds in enraging it; Worldmind warns that it will not stop pursuing him until it has killed him. Nova thinks that it's better than nothing, just to help Tyro flee.

However, Tyro has returned, trying to prove that he's no coward. Unfortunately, the siredam rips him apart before engulfing him. But then, Worldmind detects that its techno-organic code is being rewritten: from the inside. Next thing they know, Tyro's voice comes from the siredam, acknowledging the lessons he had learned of courage and self-sacrifice. When asked how is it that he has a new body, Tyro explains that early in his development, Warlock transmitted his mutant strain of the transmode virus. Gambling on his life, he planned on using the same strain to overwrite the siredam's. Its feral personality could not cope with it, thus he came into control, including its immense stores of lifeglow.

Nova quickly recovers Warlock, whom Tyro infuses with lifeglow, bringing him back to life. Startled, Warlock is confused, before seeing the siredam before him and panic. Nova then informs him that it is in fact Tyro. Nova then asks Tyro to cure both Gamora and Drax. Once it is done, he walks up to the two. Drax is grateful for being free but Gamora is scared, feeling that she is worthless without the transmode virus. Nova comforts her, assuring her that he's found a cure to save the Kree.

Drax then notices the Technarchy and assumes them to be hostiles. Nova informs him that they are friends. Warlock then opens up the idea to free the Kree from the Phalanx.

Retrieved from "https://heykidscomics.fandom.com/wiki/Nova_Vol_4_12?oldid=1448892"
Community content is available under CC-BY-SA unless otherwise noted.