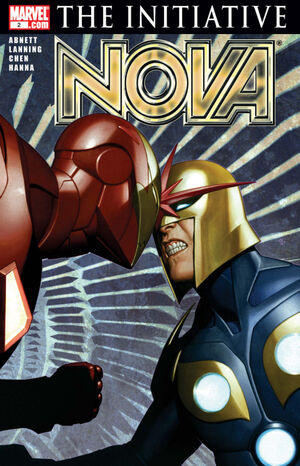 Quasar died in front of my eyes. Even Thanos was killed. And you heard something... Vague?

-- Nova, not really amused by why the Earth heroes didn't respond to his call.

Nova arrives back on Earth at his parents' house. But as soon as he opens the door, he accidentally scares his parents with his translators set on Kree, before he switches to English and pulls off his helmet. The scene skips to a family meal, discussing recent events. His parents express that they thought he was dead, regarding an incident at Stamford in which his comrades in New Warriors were partially responsible for the death of 612 people. Then Worldmind, alerts Nova, who steps outside to find a S.H.I.E.L.D. squad on the front lawn, led by Iron Man, who is surprised to see him.

Ten minutes later, on the Helicarrier, Nova snaps at Iron Man never to bring a strike team to his parent's house again. Iron Man, asking Nova to call him Tony, apologizes to him as Richard. He reveals that in light of the Stamford incident, his identity was leaked to the general public and they blame him by association. Stark notes that his power level is higher than it used to be. Nova tells him that he is currently the keeper of the entire Nova Corps' power source and informs Stark about the Annihilation War. Stark is surprised that he didn't know about it, even from their Shi'ar sources. Nova insists that as commander of the United Front, he sent a warning to the Fantastic Four. Also, he saw Quasar die before his very eyes, even Thanos was killed. He ended it all by tearing Annihilus apart.

Stark informs Nova of the changes happening in their nation, even the world. He explains that registration is to help superhumans to be properly trained, qualified, and accountable, so that tragedies like Stamford can't happen again and the public can continue trusting them; Nova states that as a Nova Corps Centurion, he was trained in all those areas. Stark offers Nova the chance to register, stating that he, as a New Warrior and Nova Corps Centurion, is already displaying unmatched discipline and responsibility. His Nova Corps methodology will also improve human-superhuman relations, including redeeming the New Warriors. Nova states it simply by quoting Spider-Man phrase of "with great power, comes great responsibility"; Stark informs him that Spider-Man is in fact Peter Parker. Nova asks for a day before he decides.

Out on the deck, Justice informs Nova who of their original team they lost Namorita and Night Thrasher. Robbie Baldwin, aka Speedball managed to survive but had condemned himself as a killer as penance. He encourages his friend and teammate into joining the Initiative; Nova admits that he's having a hard time with all this news, especially his deceased teammates; he loved Namorita. Justice also advises that he do not wear his Nova uniform in public, as he already got hate mail; Nova concurs, stating that Worldmind doesn't want any possible diseases infecting the Earth. He then sky dives from the Helicarrier to return home.

Back in his old room, Nova reminisces over how everything on his planet has changed. Worldmind advises that he get some rest. As he closes his eyes, Nova asks Worldmind to look up on how the other New Warriors are doing.

Two hours later, Mr. Rider comes down to see Nova sitting in a chair, his eyes glowing. Worldmind is controlling him, delighted to actually speak with Nova's parents, freaking them out. When Nova comes his senses, unaware of Worldmind's. This, nonetheless, has alienated him from his parents.

In the morning, Nova leaves the house, wearing a trench coat to hide his uniform, deciding to show Worldmind his home town. Then, out of nowhere, he is attacked by Diamondhead, who had been waiting a long time for him to come home, so he can get his revenge. He manages to subdue his foe without harming anyone by blasting off his right arm. He then turns the criminal to the police, who immediately ask for his registration papers. One of the officers recognizes him as a New Warrior. While exiting, he muses how great it was back in the past when everyone congratulated him for a job well done. Worldmind then brings his attention to the Thunderbolts standing in the way.

Retrieved from "https://heykidscomics.fandom.com/wiki/Nova_Vol_4_2?oldid=1518057"
Community content is available under CC-BY-SA unless otherwise noted.