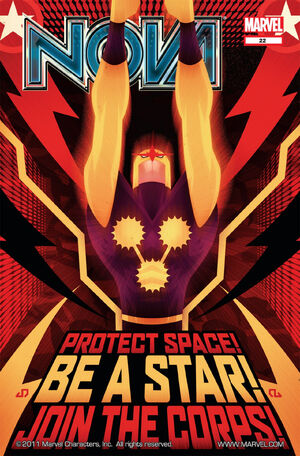 Analysis from deep range probes indicate heightened tensions between the Shi'ar Imperium and the Kree Empire. Additionally, there are reports that the Inhumans of Attilan have obliterated the remains of the Skrull fleet. You cannot eliminate an ancient galactic species without consequences. Conflict is imminent. The Corps must mobilize in a peacekeeping role to restore order. You must not interfere with the operation of the Corps at this critical time...I will not warn you again.

Retrieved from "https://heykidscomics.fandom.com/wiki/Nova_Vol_4_22?oldid=1448902"
Community content is available under CC-BY-SA unless otherwise noted.