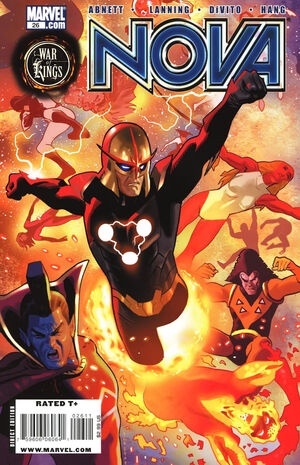 I am Richard Rider, the Nova Prime, and you have killed far, far too many of my Centurions.

A Nova Corps group is pinned down by the Shi'ar Imperial Guard, sustaining heavy causalities. Among them are Lindy Nolen and Tre Owens. They try contacting Worldmind to inform him of their situation. Just as Warstar is about to destroy them, his heads are blasted off by Richard Rider, who had reclaimed his title as Nova Prime. He then destroys the Shi'ar destroyer Ionclad, before returning the Centurions to Nu-Xandar; Lindy is more surprised to see that Worldmind is a she now. He urges them to return to Earth and live normal lives, but Tre and Lindy insist on staying.

Rider then goes to Irani to ask where his brother Robbie is. The Rigellian informs him that Robbie and Qubit had left for the Kree colony of Nil-Rast, where Cohort 86 had been killed in action. Rider takes both Irani and Morrow to find Robbie. As they approach Nil-Rast, Worldmind reminds Rider then this is the place whee Gamora killed her template: Ko-rel. Rider reminds her that though she talks like Ko-rel, she isn't her.

Upon arriving on the surface, the Centurions are attacked by the Kree and Inhumans, who use echo-weapons. Rider calls out that they are on a peacekeeping mission, but the Inhumans consider their arrival an act of aggression. Among the charging Inhumans is Triton, whom Rider refuses to fight. Luckily, Ra-Venn, a veteran of the Phalanx Conquest, calls for everyone to stand down, personally vouching for Rider. Showing Rider to the infirmary, they find Qubit. When asked as to where Robbie, Qubit could not provide an answer. Triton then shows Rider the pile of Centurion helmets.

Meanwhile, the Shi'ar assault the ceded Kree homeworld of Kree-Lar, home to Ravenous' forces. In his own palace, Ravenous tells his advisor Orbus that Vulcan could've made an alliance against the Kree with him. Instead, he wants to simply conquer Kree-Lar. Orbus assures Ravenous that they will push back the Shiar and adds that Vulcan is overstretching the Shi'ar's resources to annex the ceded territories as well as the Kree.

Then suddenly, an extremely fast object strikes Ravenous and kills Orbus. The object is in fact Xenith, who was sent by Vulcan to assassinate Ravenous to demoralize his forces. Ravenous attempts to fight back but is no match for the Strontian. Then suddenly, Xenith is pinned down by a gravimetric beam, emanating from Robbie, who declares that Ravenous is under his protection and she is under arrest.

Retrieved from "https://heykidscomics.fandom.com/wiki/Nova_Vol_4_26?oldid=1448906"
Community content is available under CC-BY-SA unless otherwise noted.