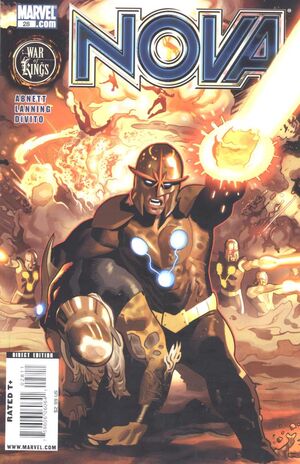 A WAR OF KINGS TIE-IN! It’s the final showdown between Nova with the surviving members of the Nova Corps against the most ruthless members of the Shi'Ar Imperial Guard! Can Rich survive and can he save the life of his brother, Robbie, who finds himself caught between the ruthless Ravenous and murderous Strontian? Be there and find out why ComicPants.com raves: “The level of writing, creativity and just the sheer level of comic book joy that each issue holds amazes me every single time.”

Retrieved from "https://heykidscomics.fandom.com/wiki/Nova_Vol_4_28?oldid=1732988"
Community content is available under CC-BY-SA unless otherwise noted.