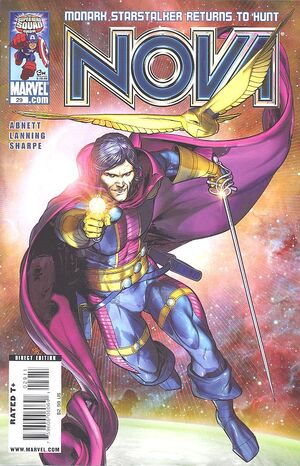 Okay...the Black Hole Sons...nine neutron slaves, members of the Black Hole Sons, out of their tiny headboxes on Krush, riding right in to board us and free their boss. Oh, and in some parts of the cosmos, they're called Mindless Ones. That any clearer?

The Worldmind has identified the mysterious vessel as an Upholder class Nova Corps patrol cruiser, the Resolute Duty, presumed lost thirty-five years ago. Rider takes hsi senior group of Centurions to investigate, unknown that someone is on that ship, who sends nanocloud to Worldmind.

Inside the ship, the team splits up to cover the ship, discovering that the ship is constantly been reinforced. Then suddenly, something cuts off Worldmind's connection to Rider, as her tractor beam cuts off, causing the ship to drift. He is then attacked by an unknown person.

Worldmind tries to warn the probationals but her transmission became disrupted and then ceased. The probational Novas wish to go and assist but Robbie and Tre reminds them that Rider told them to stay where they are. Tre then analysis Worldmind and determiens that she trying to fight off an external attack, coming from right in the Resolute Duty.

Rider brings up an energy ball in his fist, revealing his attacker to be a Nova Centurion named Zan Philo, who has been on the Resolute for thirty-five years, along with the servant droids. He explains that his ship ended up in a lawless universe. He believed it was his duty to enforce the law in that universe, before finding the Fault. However, proximity to it knocked out the Resolute's power systems and he already has a prisoner itching to get free. Rider assures him that they'll debrief back at Nu-Xandar and hold in prisoner in their most secure jail; it's currently holds a Strontian and an ex-herald of Galactus.

Back on Nu-Xandar, Robbite determines that Worldmind is being infect with nanobots and is forced to fight them, as Ego the Living Planet is regenerating quickly.

Philo shows the Corps his prisoner, a Neutron Slave and head of the Black Hole Sons who is hiding in the darkness. As he explains about his new arms on his right side, the conversation is interrupted by Worldmind, who informs them that whoever unleashed the nanotech is right next to Rider. Fraktur then reveals himself to be Monark Starstalker, who has disguised himself with the nanotech; the real one is sleeping on the bridge from being hit by the vortex pistol. This startles the Centurions, who attempt to fight him only to be knocked back. Rider asks if he's working for the Neutron Slave; Philo shouts that Starkstalker is a bounty hunter and demands that he get off his ship. Rider backs him up that he is in Nova Corps territory, which falls under galactic law; Starstalker states they've illegally conveyed his quarry and threatens to blow up the ship's engines if they don't hand him over. Worldmid then contacts Rider again, informing him Ego is back and wants his body back. Worse, nine Neutron Slaves burst into to free their boss.

Retrieved from "https://heykidscomics.fandom.com/wiki/Nova_Vol_4_29?oldid=1448909"
Community content is available under CC-BY-SA unless otherwise noted.