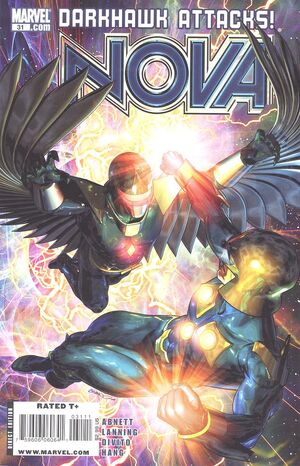 A REALM OF KINGS story! Torn between duty and friendship, the galaxy’s #1 lawman hunts for the most wanted man in the universe: Darkhawk! Determined to bring an assassin to justice, Rich Rider will rocket into the universe’s most dangerous new location: The Fault! Former friends collide in the latest chapter in the comic that Aint It Cool News calls “one of my favorite Marvel books…a hidden gem.”

Retrieved from "https://heykidscomics.fandom.com/wiki/Nova_Vol_4_31?oldid=1725968"
Community content is available under CC-BY-SA unless otherwise noted.