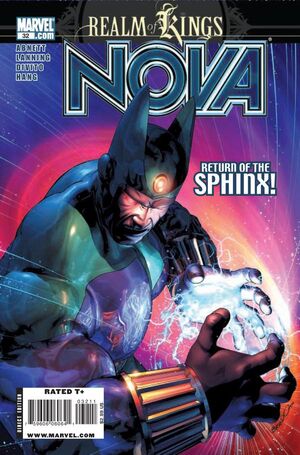 Appearing in "Riddle Of The Sphinx (Part 1) - The Gathering"Edit

A REALM OF KINGS ISSUE! It’s the long-awaited and shattering return of one of the Human Rocket's greatest foes...the Sphinx! Nova and Darkhawk are missing and presumed dead-and they really will be dead if they don’t put aside their roles of hunter and hunted! Can the galaxy’s top cop team up with the galaxy’s most wanted to stop a rising menace from the past...and the future? Find out what a huge threat the immortal Sphinx poses to the Marvel Universe, and discover why CosmicBookNews.com raves “tightly paced, beautiful to behold, exciting, and fun…from beginning to end, NOVA will keep you on the edge of your seat.”

Retrieved from "https://heykidscomics.fandom.com/wiki/Nova_Vol_4_32?oldid=1720811"
Community content is available under CC-BY-SA unless otherwise noted.