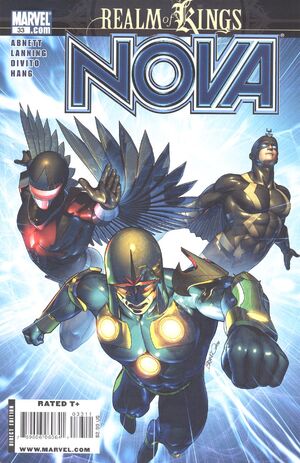 Namorita is re-hydrated and her first act is to kiss Nova full on the mouth. Nova tries to contain his surprise about her being alive. As Darkhawk greets his old friend, Mr. Fantastic reminds Nova not to tell Namorita about what will happen to her without causing paradoxes.

After Namorita explains how she arrived in the middle of the desert and became dehydrated from the hot sun, Mr. Fantastic, Nova and Darkhawk explain how the Sphinx brought them to this magical construction that resembles Ancient Egypt. Then suddenly, the sky turns dark, as the Sphinx, who looks younger, makes a dramatic entrance on a chariot driven by wings lions, leading an army of anthropomorphic bugs. The heroes attempt to fight him but are outnumbered. They retreat into the pyramid before coming up a door with strange glyphs, hiding a magical power source. Mr. Fantastic attempts to analyze it only to be knocked by an energy burst. Darkhawk's suit reacts differently, as if the door recognizes him. Then suddenly, everyone is blown away by another energy blast.

Darkhawk awakes to find everyone but himself trapped in energy bubbles. Each of them is experiencing their own dreams of what they want. Nova experiences himself not breaking up with Namorita, thus making sure that the Superhuman Civil War and the Superhuman Registration Act is averted. Then, he tells Mr. Fantastic about the Skrull infiltration and they stop it, preventing the Inhumans from taking over the Kree due to anger over the betrayal, which leads to Lilandra's death. Then, alongside the Avengers and Fantastic Four, they stop Annihilus from declaring war on the universe; Mr. Fantastic sees his wish that the Fantastic Four never getting their powers and living normal lives; Black Bolt's sees his parents alive and he forms peace between humans and Inhumans; Namorita sees a happy life with her cousin Namor. Darkhawk is able to wake they all up. The heroes then notice that the scenery has changed, as they are on a sphinx statue facing another statue, below the Fault. They then find the Sphinx, looking older and attached to machinery. Powering up a gravimetric pulse, Nova demands some answers. The Sphinx confesses that his continued manipulations of time caused temporal cancers to eat away at his body, rendering himself immobile to time travel. Finding the Fault, he used it to call his younger self to help him prevent the cancer from occurring by changing his destiny.

Unfortunately, younger Sphinx barges in, explaining that he does not care about changing his future; this is the reason older Sphinx brought all the heroes who previously defeated him. He plans on merging their two Ka stones so that he can become a god and remake the universe to his liking; there can't be two Ka stones in the normal universe, but in the Fault, it is possible for the Sphinx to do so. The heroes attempt to attack the younger Sphinx only to be knocked back; luckily, since the Ka stones are against each other and cancel out each other. Therefore, younger Sphinx brings in Moonstone, Talon, Ulysses Bloodstone, Basilisk and Stargod to take them down.

Retrieved from "https://heykidscomics.fandom.com/wiki/Nova_Vol_4_33?oldid=1448913"
Community content is available under CC-BY-SA unless otherwise noted.