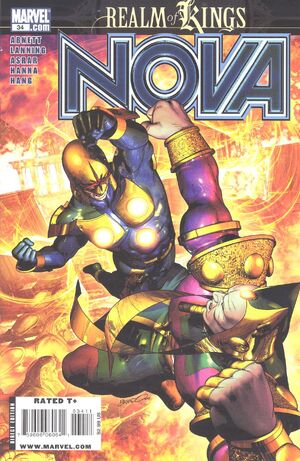 A REALM OF KINGS TIE-IN—GUEST-STARRING MR. FANTASTIC AND BLACK BOLT! On a world of dark sorcery, Nova and his surprising allies battle the ancient evil of the Sphinx, but what are they really fighting for? The Human Rocket could rewrite the course of history and save thousands of lives—including the life of his true love. But should he, or is the alternative too terrible to contemplate? Classic foes, great guest-stars and more cosmic thrills await you in the next issue of the series that Aint It Cool News calls “Bar none, one of the consistently best comics Marvel puts out…Those of you who aren’t checking this one out should be ashamed of yourselves."

Retrieved from "https://heykidscomics.fandom.com/wiki/Nova_Vol_4_34?oldid=1729938"
Community content is available under CC-BY-SA unless otherwise noted.