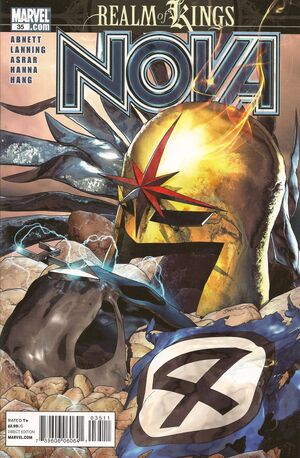 A REALM OF KINGS ISSUE! In The Fault, where anything is possible and cosmic terrors are born, two eternal forces meet in shattering conflict—and Nova is caught right in the middle! With a fabulous cast of guest stars—including Mr. Fantastic, Black Bolt and some jaw-dropping foes—the time-slipping saga of the Sphinx comes to its galaxy-shaking conclusion! Who will be the last man standing in the series that has CosmicBookNews.com raving: “With intriguing stories, captivating drama, high concepts, and bare knuckled action—NOVA is the best cosmic comic in the business.”

Retrieved from "https://heykidscomics.fandom.com/wiki/Nova_Vol_4_35?oldid=1729940"
Community content is available under CC-BY-SA unless otherwise noted.