Start a Wiki
Part of the 'Annihilation: Conquest' event 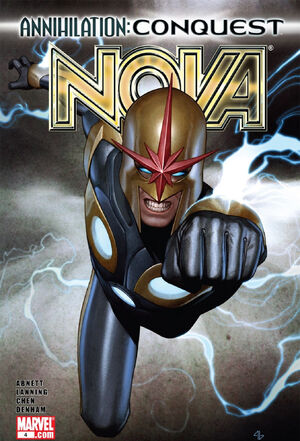 Nova is quite capable of crippling the Phalanx.

Rider plows through a Kree sentry, that spontaneous attacked him. As they reach Hala, an energy pulse emits from the planet. Worldmind reports that all communication between and outside the Kree Empire has been severed. They are then attacked by eight more sentries, which he destroy. Worldmind then informs him that they are being attacked by a virus attempting to corrupt his gestalt. He urges Rider to leave immediately, stating that the Kree have been attacked by the Phalanx.

Elsewhere, the Phalanx are monitoring Rider. Then Gamora, now a Phalanx Select, advises sending a hundred sentries to take Rider down.

Worldmind outlines the Phalanx and how they are infecting both technology and organics. He had to divert 20% power to keep it at bay. He advises Rider to leave Kree space and warn other species of the Phalanx. However, Rider refuses to abandon the Kree, who had fought alongside him in the Annihilation War. Worldmind then reluctantly tells him the location of the Babel spire, the source of Phalanx activity. Unfortunately, the infected sentries bar any possible route of escape. Overwhelmed, Rider had to open a stargate to escape and annihilate the sentries. In transit, he tells Worldmind to get the heal and repair subsystems on online to mend his wounded body. But as he tries to exit Kree space to deputize backup out, Worldmind reports that the entire Kree galaxy is surrounded by an impenetrable energy barrier. Rider attempts to disengage back into realspace but hits the barrier, unable to respond to Worldmind's calls.

On the now desolate Kree outworld of Drez-Lar, the downed crew of the Spirit of Supremor see something fall to the surface. Stellar Captain Ko-rel takes a team to investigate it. They find the charred body of Rider. Then Worldmind link his mind to her's, before a surge of energy penetrates her isolation suit, turning Ko-rel into a Nova Centurion.

Retrieved from "https://heykidscomics.fandom.com/wiki/Nova_Vol_4_4?oldid=1448884"
Community content is available under CC-BY-SA unless otherwise noted.