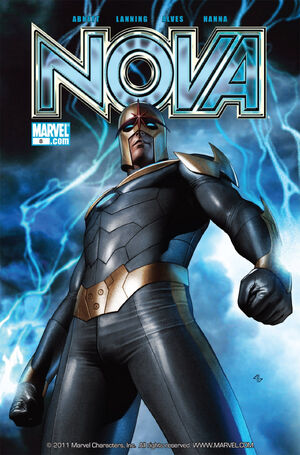 Richard...my 'freak' has also been taken to a whole new level.

Rider remembers a story Peter Quill told him during the Annihilation War about the Rip, a zone where space-time collapses at the end of the universe where the laws of physics don't apply. Right now, he's in the Rip, trying to get out. He is knocked unconscious by a vortex. When he comes to, he finds himself a techno-organic structure, with strange writing on its walls. Rider soon finds a crying alien female muttering, "ready" repeatedly. Worldmind identifies her as Suspensor, of the Luminals, Xarth Three's equivalent of the Avengers. He thinks that she's scared of the dark and lights the area with small photons to light the shadows, but it doesn't work. She then turns into a zombie and attacks him. Rider defends himself but his blast accidentally kills her instead of stunning. The other Luminals arrive and jump to the wrong conclusion and attack as well. In his weakened stage with only 83% of the Nova Force holding the transmode virus in check, Rider is forced to flee. He then tries to swallow what has happened, as if he was pulled into a horror movie. Then, out of nowhere, he sees a dog in a space suit approaching him. Even more so after he pets it, he learns that it is a high-grade telepath named Cosmo, who can even hear Worldmind. He tells Rider that he's on Knowhere, a city right inside the severed head of a giant Celestial. Beings from all over the universe come to Knowhere, waiting for the end of the universe. Right now, the city's population had to go into hiding right after the Luminals brought something in a big box. Worldmind then informs Rider that he had deciphered the writing on the wall, which is a countdown to a timer.

Six levels below, the Luminals gather to cast the box holding something called the "Abyss" into the end of the universe. Then suddenly, they turn into zombies too.

Retrieved from "https://heykidscomics.fandom.com/wiki/Nova_Vol_4_8?oldid=1448888"
Community content is available under CC-BY-SA unless otherwise noted.