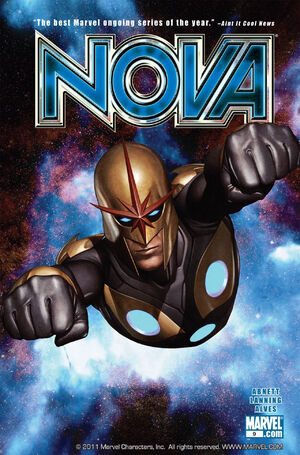 Cosmo explains to Rider that three days ago, when Knowhere was mostly active, security found two residents fused to the bulkhead. All activity was traced to the Luminal's quadrant of Knowhere, though they denied that anything was wrong. But by the next day, more citizens began turning into zombies, so Cosmo had to force any survivors into the dimensional envelope, which is the tag, or tesseracted storage crystal, on his collar. However, its power source is finite, meaning that eventually, all its occupants be released and succumb to the dangers in the city. Worldmind explains to Rider that the cause of all this is the Luminals' archenemy: the Abyss. The Abyss is a mystical entity has the power to turn organics into "meat puppets". Only the buffer holding the transmode virus in Nova and Cosmo's high-grade telepathy protects them -- albeit, at least temporarily.

Then suddenly, they are attacked by the zombies. Being outnumbered and outpowered, they are forced to move further towards the zone where the Abyss' prison is. Unfortunately, the prison in which the Abyss is being held is breaking down, as he always escapes out of anything that could try and contain him. Cosmo projects a psychic barrier to block the incoming zombies, while Rider dealt with the Abyss. He was able to use the transmode virus to interface with the prison, repairing it and sealing the Abyss once again, causing the zombies to disintegrate without his guidance.

Soon after, life on Knowhere returns to normal. Cosmo repays Rider by showing him the Continuum Cortex, which can reach anywhere in the universe, even Kvch, home of the Technarchy, the parents of the Phalanx, the only ones who can cure him from the virus. He is given a passport bracelet that will enable the transport. Before departing, Rider gives Cosmo a chewy bone toy he bought from the market.

Two hours later, an alarm is sound. Cosmo and security rush to the Cortex to find Gamora and Drax, holding passports. They use the device to follow Rider's trail.

Cosmo hid behind the couch when "The Exorcist" was played.

Retrieved from "https://heykidscomics.fandom.com/wiki/Nova_Vol_4_9?oldid=1448889"
Community content is available under CC-BY-SA unless otherwise noted.