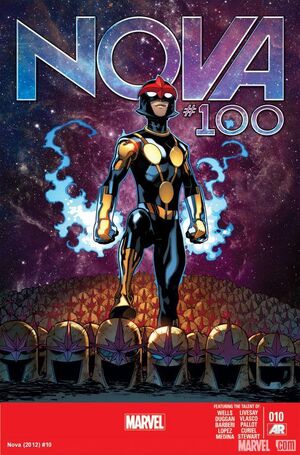 I was personally asked by Thor, a god, to join the Avengers, the most famous super-team in the world. And what did you say? You said "no."

Appearing in "Chapter 10: Land and Launch"Edit

Synopsis for "Chapter 10: Land and Launch"Edit

In the wake of the Kaldera incident, Sam's arrogance grew, making up exaggerated stories of how he was granted the Silver Surfer's surfboard and then singlehandedly defeated Dr. Doom after he wiped out all the Avengers and X-Men with Mjolnir. The whole story was conceived in order to impress his mother and prove her restrictions on his dual life are completely unnecessary. He also brushed off the newly reformed New Warriors as a bunch of nobodies who are beneath someone of his talents. After that, his mom let both Justice and Speedball rest at his house until they could decide who else to recruit into their team, making him very annoyed. He became even more aggravated when his crush, Carrie, came over to confirm her suspicions about Sam being Nova. He was going to tell her she was correct until she cut him off and made it seem like Sam didn't trust her. Carrie then ran away from Sam and he felt like everybody was suddenly changing. Sam was so angry that he flies to the moon to find Uatu, the only person who he feels comfortable talking to. After venting his frustrations and demanding any form of guidance, the Watcher shows him visions of his predecessor Richard Rider and how he grew from an upstart hero like Sam, to a founding member of the original New Warriors, and to the hero of the Annihilation War. Uatu also shows him how the Avengers neglected Richard Rider and the New Warriors needed him. Sam being put in his spot by Uatu realizes his wrongs and goes back to his mother and agrees to all her conditions and officially joins the New Warriors as a reserve member.

Sam was later seen responding to a distress call, he rescued a starship from hostile forces and escorted them back to their homeworld. Meanwhile, Sam's mom and principal are talking about Sam's tendency to not show up to school. The principal also tells her that the house won't be getting anymore money from her husband because he hasn't been showing up to school either. While flying home Sam experienced some problems. He quickly sped up and began to become blind until he crashed into Earth.

This will be the 100th issue featuring Nova

And as if that's not enough new, you also get a whole bonus story from new regular Nova writer Gerry Duggan!

Retrieved from "https://heykidscomics.fandom.com/wiki/Nova_Vol_5_10?oldid=1482224"
Community content is available under CC-BY-SA unless otherwise noted.