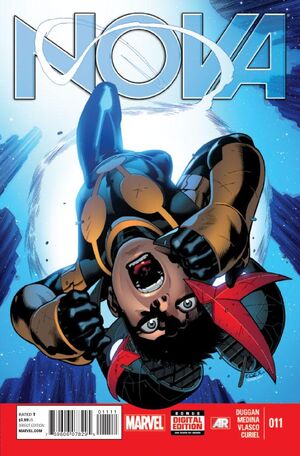 'Cause if you mess with one of us... You mess with all of us! Even though I am the last one.

Sam was then escorted to Doctor Kettlewell's office by his mother. Dr. Kettlewell assured Sam he wasn't blind, but was having optical migraines due to the amount of hits he has taken to his head. Sam then returns to school, only to get into another fight with Karl and wind up in the principal's office again. He was let off with a warning and returned to his next class when he started to experience his "blindness" again. He realized it was a map of some sort and shouted with joy, unaware of where he was at the moment. His teacher sent him to see Principal Philbin again. He realized detention wasn't working for Sam and instead made him join the chess team. Sam joined and sat through a "boring" lesson on pawns by Mrs. Schaefer and then left home in a hurry. The first chance he got, Sam flew off to find out what the map was for.

After tracking down one of the coordinates, Sam encountered the corpse of K'thol, a former gold dome Nova. He was quickly attacked by alien spiders and was able to fend them off until he grabbed K'thol's Nova helmet. A message was sent to Sam about his cause of death and how these very spiders killed K'thol for no reason. Infuriated, Sam struck all the spiders down and continued on his journey to locate all other Novas and uncover the truth of the missing corps. Unknown to Sam, by playing K'thol's message, Nova bounty hunter, Cadivan, found him on his radar and started planning to attack him and add another helmet to his collection.

The deadly secrets of the Nova Corps stand revealed...and Sam is waaay over his helmeted head.

This is the beginning of something big, cosmic fans! An EPIC Odyssey that will take our warp speed wunderkind to the very ends of the Marvel Universe!

Retrieved from "https://heykidscomics.fandom.com/wiki/Nova_Vol_5_11?oldid=1448927"
Community content is available under CC-BY-SA unless otherwise noted.