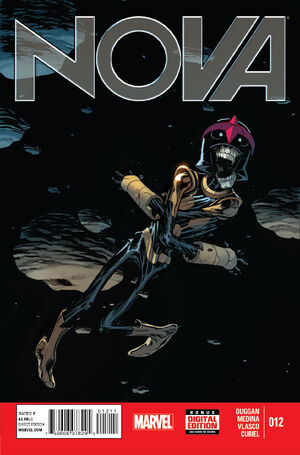 I shall end this corrupt Nova, and let Stormbreaker be my interrogator!

After tracking down one of Cadivan's Nova Helmets and seeing an image of the Nova getting decapitated, Nova went face to face with the very man responsible for killing countless Novas. After being deemed unworthy of battling, Cadivan gave Sam back his helmet after actually taking it and sent Sam away from his ship by ejecting him. Within seconds Nova was tasked with intercepting a distress call.

After following the distress signal to its origin, Sam found a huge Nova ship that was being attacked by unknown ships. After disarming the ships, Sam boarded the spacecraft and was surprised to find no Novas. Instead, he found Captain Skaarn who was thankful for Nova coming and rescuing him and claimed to be in his debt so stood there to answer any questions he may had. Captain Skaarn also told Sam how his "battery" was fried and needed a jump-start to start moving again and then took Sam to see what the problem was. Sam was startled when he found another dead Nova, as the battery. The Nova was attacked by a microscopic infection and although his mind was dead, his body lived on. Captain Skaarn's Tinkerer was able to send an electrical impulse throughout the Nova's body, thus powering the ship, however, as his flesh decayed so did his ability to power the ship. Nova originally rejected the suggestion that he powered the ship, but after being swayed by Skaarn's "daughter", Jinin, he agreed to do it and was successful. After Sam left, Skaarn then gave Jinin her food for pretending to be his daughter, but tricked her by throwing her in his slave pit where they all attacked her for her food. Afterwards, Beta Ray Bill was revealed to have been on board Gron's ship and Captain Skaarn and his crew were evil and because Nova helped them and defeated the good guys, Beta Ray Bill swore to end Sam.

Retrieved from "https://heykidscomics.fandom.com/wiki/Nova_Vol_5_12?oldid=1448928"
Community content is available under CC-BY-SA unless otherwise noted.