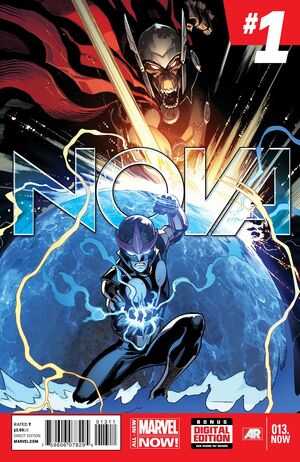 Appearing in "Chapter XIII: The Punch-Out at the Carefree Corral"Edit

Synopsis for "Chapter XIII: The Punch-Out at the Carefree Corral"Edit

After tracking Sam down to his school, Beta Ray Bill broke up a fight between him and Karl. Freaked out, Karl ran away and hit his head on a light pole. Taking his frightfulness as him knowing he did something wrong, Beta Ray Bill assumed he was the Black Nova whom saved Skaarn. While Beta Ray Bill was distracted Sam was able to put on his helmet and attacked Beta Ray Bill.

During their fight Sam realized Captain Skaarn was evil and swore to Beta Ray Bill he didn't know this and demanded he joined him to stop Captain Skaarn.

Sam, however, had to baby sit Kaelynn while his mother had her first day of work. So he got Carrie to do it for him while him and Beta Ray Bill went looking for Captain Skaarn.

After Infinity, Inhumanity, and the landmark 100th appearance of Nova, it’s been a crazy year for the galaxy’s newest hero! As Sam Alexander continues to hunt down clues of the Nova Corps demise, he finds an all new threat of his own making. But the arrival of former Mjolnir-wielder Beta Ray Bill means Nova’s days may be numbered.

Retrieved from "https://heykidscomics.fandom.com/wiki/Nova_Vol_5_13.NOW?oldid=1448941"
Community content is available under CC-BY-SA unless otherwise noted.