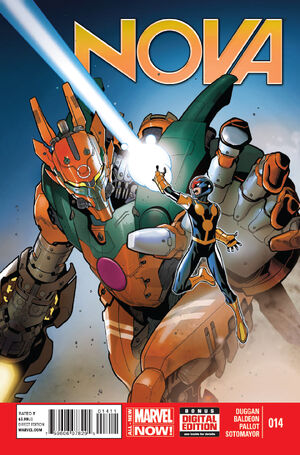 I have an idea, but you may not like it.

Tracking Captain Skaarn to Knowhere, where he is attempting to buy a giant War Bringer, Beta Ray Bill confronts him after Skaarn kills the giant robot's owner. Skaarn, however, threatens to airlock his prisoners The Korbinites if the asgardian does not withdraw. In the meantime, Sam fights and defeats the War Bringer using the Nova force. Beta Ray Bill then informs him of the situation, giving Nova an idea. Back on Knowhere, the captain uses the Continuum Cortex to teleport Beta Ray Bill to another realm. Sam manages to stay behind by project an image of himself, tricking Skaarn. While trying to bring Beta Ray Bill back, Sam follows a voice in his head, finding the psychic dog Cosmo, captured and injured by Skaarn.

It's clean-up time as Sam and Bill ride through the cosmos attempting to right the wrongs that Sam caused!

Retrieved from "https://heykidscomics.fandom.com/wiki/Nova_Vol_5_14?oldid=1448929"
Community content is available under CC-BY-SA unless otherwise noted.