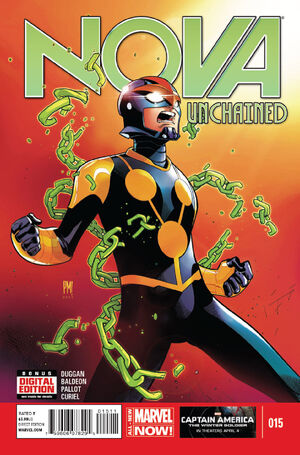 Is your super-power to always have bad information?

Appearing in "Chapter XV: Can we keep him?"Edit

Synopsis for "Chapter XV: Can we keep him?"Edit

After rushing the poisoned Cosmo to the infirmary, where the young Nova helps save him by using The Nova Force, Sam goes to confront Captain Skaarn. Meanwhile Skaarn is enlisting the help of three rogue Spaceknights, known as the "Disavowed of Galadoria". Skaarn plans to rob a heavily guarded vault, that due to it's orbit around a quasar is accessible only once every few years, and needs them to teleport directly into the vault, using the Continuum Cortex, while he attacks head-on. 30 seconds too late, Sam finds that Skaarn has already left for his ship, and is then attacked by the Spaceknights. Sam defeats the mercenaries, having melded two of the knights legs together, and teleports them to where the Continuum Cortex was last used, Jotunheim, where Beta Ray Bill is. The Spaceknights then attack the asgardian.

With Skaarn's assault on the vault still 8 hours away, Sam uses the Continuum Cortex to get back to Arizona, and school, to avoid getting suspended. Back on Knowhere, Sam reunites with Beta Ray Bill and teleports to the vault, that according to Beta Ray Bill, is a secret weapons vault. But the heroes are too late, as Captain Skaarn somehow managed to break in to the vault, without any help, and retrieving what he was looking for.

Retrieved from "https://heykidscomics.fandom.com/wiki/Nova_Vol_5_15?oldid=1448930"
Community content is available under CC-BY-SA unless otherwise noted.