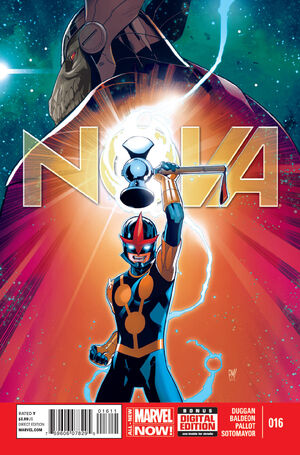 While Beta Ray Bill tried rescuing the Korbinites, Sam took on Skaarn alone. After threatening Sam's world, Sam became enraged and attacked Captain Skaarn with full force, imagining Skaarn as Moffet, until he believed he was dead. Sam took his sword and threw it into a dying star, thinking it would simply destroy it. However, Beta Ray Bill went after it to prevent the sword from falling into the wrong hands again. Sam then took the almost dead captain to Cadivan who in return gave him his helmet.

Jinin, who expected Sam to make money off the bounty hunter, was very upset with Sam for doing that. She smacked him and claimed that he made a new enemy. Sam then went to the site where it all happened and made a tribute to the dead Nova who powered Captain Skaarn's ship. Glad it was all over, Sam returned home only to be devastated with the news that his family will lose their home.

Retrieved from "https://heykidscomics.fandom.com/wiki/Nova_Vol_5_16?oldid=1448931"
Community content is available under CC-BY-SA unless otherwise noted.