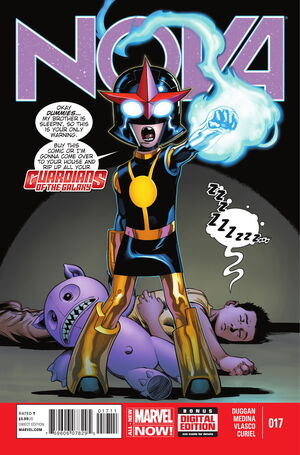 When I see the Watcher again, I'll ask him directly where Dad is... I don't think he's supposed to help me... but we're friends.

Waking up, Eva Alexander is pleased to find her son back from his long trip in space and team-up with Beta-Ray Bill, but while brewing her morning coffee, she is shocked to see the present he brought back for them from space- a massive boulder of gold. Unfortunately, the grass beneath it is burning, indicating that the gold is irradiated, and she forces Sam to take it back into space and throw it into a sun to get rid of it before it can harm anyone. Coming home, Sam nearly admits that he knows that the family is facing Eviction but dodges the issue at the last moment, and takes a nap on the couch while Eva heads to work, where she overhears that Sam's activities have attracted a large number of UFO watchers.

Meanwhile, back at home, Sam falls asleep dreaming of Jinin, while his younger sister Kaelynn plays, spotting his helmet and putting it on, transforming her into Nova, accidentally blowing up a hole in the wall with the Nova Force powers. Recovering the helmet, Sam consoles Kaelynn and convinces her that he'll be able to take care of the issue, sending her to bed. When Eva returns home, she immediately sees through Sam's poor attempt to cover the hole, and yells at him to leave and give her space.

Seeing an explosion out in the distance, Sam comes across a drunken driver how has crashed into a Roxxon oil tanker-train. Responding quickly, Sam is able to save the people caught in the crash from the exploding tanker by flying it above them, but the fires still catch a nearby house. Rushing inside, Sam recovers Brenda, the home's elderly owner and reunites her with her worried husband.

Returning home after a good night's work, Sam and Eva have a heart-to-heart, with Sam revealing he knows about the impending eviction and their money problems, while laughing off the danger of the UFO Watchers could represent to his secret identity. She mentions that Sam's dad used to make the same kind of messes that he did when practicing his Nova powers, but he could at least clean up after himself. When Sam lets her know that the Watcher told him that his father is still alive, Eva thanks him but tells him that she doesn't need someone to tell her that- she can feel it. As Sam heads to bed for school the next morning he reflects that the next time he sees the Watcher, he'll directly ask him where his dad is, reasoning that they're friends so maybe he'd be willing to help him, not knowing that Uatu was recently murdered.

When the Alexander home is threatened, this time there may not be anything that Nova can do to help out.

Retrieved from "https://heykidscomics.fandom.com/wiki/Nova_Vol_5_17?oldid=1448932"
Community content is available under CC-BY-SA unless otherwise noted.