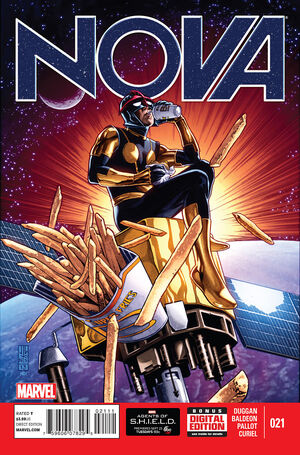 Spinning right out of the events of ORIGINAL SIN, Sam has new information about his dad - both newly revealed and troubling secrets and his whereabouts!

It's up to Sam to find his former-Nova father halfway across the universe and either give him salvation or justice!

Retrieved from "https://heykidscomics.fandom.com/wiki/Nova_Vol_5_21?oldid=1448936"
Community content is available under CC-BY-SA unless otherwise noted.