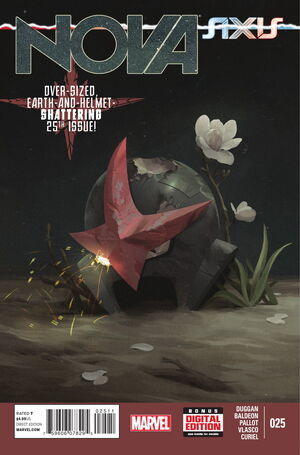 Sam compares himself to Richard Rider and his father, and while unsure how he stacks up to the both of them, as "the Earth is still revolving around the sun" Sam assumes he is doing ok. Reminiscing on his past adventures and allies he has made, he specifically recalls going 1 on 1 with Hulk, and winning, albeit at a cost.

Sam and his mother are in the doctor, and the doctor tells Eva to keep Sam out of bright light and to avoid physical contact. As they leave the office, the Alexanders' run into Steve Rogers. As Steve and Eva have a private conversation, Sam takes his aspirin as he imagines what they are talking about - he's finished. The helmet barely works and he's injured. Trying to find humor in what he believes the end of his Nova career, he imagines getting yelled at by Captain America as the top prize in the screw up cup, and is taking by surprise when his mother kisses on the cheek and wishes him a safe trip. As they arrive at Avengers Mansion, Steve tells Sam to put on his helmet, and after he does, Sam apologizes for going behind the Captain's back, but there were no Avengers to send and the town was in danger - Steve cuts him off. "There are always Avengers," Steve says, "You became one when you fought the Hulk. Today we make it official."

Inside Avengers Mansion, Jarvis takes a picture of Sam in uniform and Sam has to take bio metric tests. After finishing the tests, a large group of Avengers are in the next room, and Sam, at a loss for words, claims to be proud and glad that they will avenge him should anything happen to him, and that he would do the same for them. He stops once he realizes he is babbling and Spider-Man tells everyone he has sustained a serious head injury. Jarvis brings his membership card and they take pictures to commemorate the event. Steve and Spider-Man talk to Sam, saying, "Were proud of you for facing the Hulk in a dire, no win situation," "But were also punishing you for flying off and engaging a rampaging Hulk in a dire, no win situation." Steve tells Sam that there is a fine line between bravery and stupidity and that Sam must try to stay alive long enough to learn that line. Steve then congratulates him, and a drunken Thor cuts in, bringing Sam close with him on the couch and telling him Hulk isn't all that bad (when he isn't trying to massacre you) and Thor begins telling Sam drunken tales, reminding Sam of his father. All of the sudden, a plane is crashing, and as they try to land in the Hudson Bay, Captain America realizes they won't make it and orders Nova ahead. Sam attempts to stabilize the plane, and realizing its too steep and that he can't do it alone, he remembers he doesn't have to as Captain Marvel and the others show up to help. Captain America orders Sam to cut the cable on a crane up ahead, and Sam does so. While the steel beams are falling, Captain Marvel goes ahead and stops them from hitting people below, and Sam thinks he is going to save the plane ... until Thor arrives and grabs it before it can hit the ground. Sam realizes the purpose of the team now, to put everyone else ahead of yourself. As Sam leaves to return to his hometown, Captain tells him to talk to Beast of the X-Men to get his helmet checked out, and as Nova flies away, Spider-Man and Captain America agree that Nova will bring a lot to the team one day.

Back home, Sam makes a scrapbook of the pictures with the Avengers, and recognizes his stupidity in his original wanting to use his Nova powers for fame. He knows that with his Avengers ID card and his day in the Avengers mansion, he knows he is on the right path. Meanwhile, Cletus Kassidy makes his way to Carefree, Arizona, looking for a Sam Alexander ...

Retrieved from "https://heykidscomics.fandom.com/wiki/Nova_Vol_5_25?oldid=1646497"
Community content is available under CC-BY-SA unless otherwise noted.