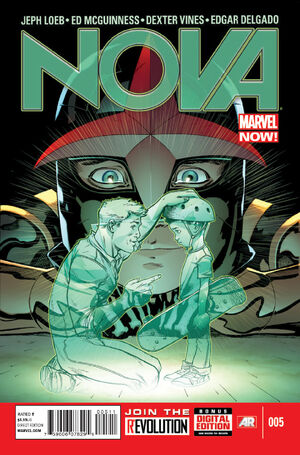 Here's how this goes down. You get back into your whalemobiles and take your little chittards and find another universe to bother. Or I blow you up.

When the Chitauri went to extract Sam into their ship, he revealed to them he was faking and quickly sped off. He went through one of the enemy ships and found the Ultimate Nullifier. He took it and then attempted to run through the mothership, disabling all soldiers. He was thwarted by Titus, a former Nova and ally of his father. Despite what Sam's father had told him, Jesse left the Supernovas when they needed him most and many of them lost their lives because of him. Titus was shot in the eye and arm and then made a trade with Chitauri, his life for all the Nova's secrets and weapons. Sam was infuriated and radiated a light so powerful that it stunned Titus and many Chitauri and escaped to Earth.

Titus followed him there and was eventually stopped the Ultimate Nullifier. Sam had developed a friendship with Uatu and revealed to him that he is the only person he feels comfortable talking to. When Sam returned home he expresses his doubt of his father's supposed death. Whom is being held captive by the Chitauri on another planet.

• Jeph Loeb and Ed McGuinness, two of the most popular creators in comics, bring you an Infinite-ly dramatic turning point in the life of Nova as he discovers that something out in the galaxy is threatening everything he knows.

Retrieved from "https://heykidscomics.fandom.com/wiki/Nova_Vol_5_5?oldid=1496978"
Community content is available under CC-BY-SA unless otherwise noted.