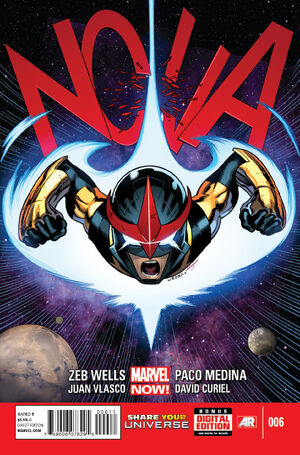 Mom, I'm a Nova now. That means I am a superhero. And superheroes do things like fly to the moon and... I don't know... pretend they don't know about the skate park because they have a secret identity.

Nova asked his Mom if he could be an Avenger to which she initially replied no. After a small speech by her, she finally decides not to stay in his way and that if he wanted to still fight crime, she wouldn't stop him.

In his everyday school life, Sam is also having some trouble settling into normal life. When he found himself in a confrontation with school bully Karl, he forgets how normal he really is. In one instance, Karl threw a punch at Sam. Sam leaned back, dodging it, but fell on his back forgetting he couldn't just fly away. He finds it even more difficult to keep his secret identity from his crush, Carrie, who is the only one that really stands up for him.

Retrieved from "https://heykidscomics.fandom.com/wiki/Nova_Vol_5_6?oldid=1448922"
Community content is available under CC-BY-SA unless otherwise noted.