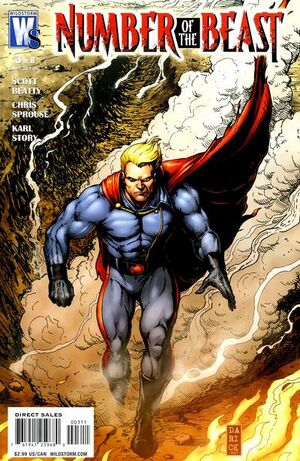 I have to help the helpless.

Appearing in "Verse Three: Angels From on High"Edit

Synopsis for "Verse Three: Angels From on High"Edit

On the City's waterfront, the seas have turned to blood, causing consternation for the heroine known as Seafarer. Her lover, the Midnight Rider, is waiting for her on the dock, and they worry that God is punishing them. All of this is ancillary to Captain Rosado, the officer assigned to monitor the City from outside. Down below him, there is a problem: the Eidolon will wake up soon. They can't put him back into the system, where he will alert the other subjects, but they can't leave him walking around either. Rosado decides to put him back in and hope for the best, but Sergeant Stringer thinks they should alert "CentCom".

In a special ops-room in the Pentagon, the word reaches a General named Somerset - the High has woken up.

On Palatine Hill, Doctor Sin has found the High, but the hero is amnesiac, and in no fit state to deal with the pending stages of the Apocalypse - especially when his hands briefly disappear in a cloud of polygons. Doctor Sin offers to tell him everything, and the High carries him away.

Down in the City, looters are hitting most shops, much to the annoyance of the Paladins. The heroes try to talk sense into the heroes, but the Redeemer has been struck silent by the sight of a baby carriage with a hole punched clean through it. He remarks that heroes always show up the imperfections in their peers, but as Black Anvil tries to cheer him up, Hootfoot arrives, carrying a baby. The news of the Apocalypse has convinced the villain to turn his life around, and so far today has saved 225 civilians from various accidents.

In the courtyard of the Paladins' headquarters, the High slowly begins to regain his memories - memories of his death, memories of his fights with Doctor Sin. Doctor Sin remarks that the High should "unburden" himself, and the High concurs, throwing Sin into the sky, before almost crushing the Mite, who was eavesdropping on the two men. This is a problem for Rosado and Stringer, since if Sin thinks he's dead, he'll wake up and be walking around. They decide to cheat, knock Sin unconscious so he wakes up afterward and assumes he had a "soft landing".

Down in the City, someone throws a rock at Neandra, causing her to briefly drop her "cave-woman" persona - much to the surprise of her fellow heroes. Engine Joe & Black Anvil use their incredible strength to shake the road like a carpet, knocking the rioters off their feet, just before the High flies over them. He tries to leave the City, but keeps popping back in the centre of the City. Frustrated, he is met by the Eidolon, who he recognises from the Changers, and who tells him that the City is fake. The Eidolon kills the High, telling him to "sleep... then wake... then know... and then get us all out of this hell."

In the bunker, the High wakes up in a tube. Half his skin is missing, and he does not look happy...

Retrieved from "https://heykidscomics.fandom.com/wiki/Number_of_the_Beast_Vol_1_3?oldid=1469508"
Community content is available under CC-BY-SA unless otherwise noted.