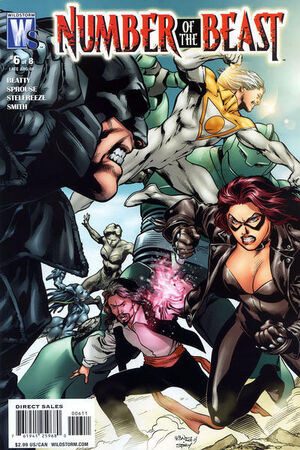 Lieutenant Welles is about to press kill button to killing everyone inside the program. Fortunately, Hotfoot catches up to her, and along the way beating Doctor Sin repeatedly in the process, and stops Welles by vibro-phasing his hand through her head, causing brain damage.

In the program, The High then learns from the Eidolon that there are many heroes and villains still remaining throughout the City. The High sets out to find them so they can all escape the program.

Back at the Pentagon, a distressed General Somerset scientist, Slyxx, a Daemonite who helped build the Number of the Beast program. Somerset questions him why the (alien-based) virtual reality technology is incapable in containing this from happening. The Daemonite then explains to Somerset that the Daemonite VR technology (the 'sleepnet') wasn't built for a large "group-collective" and nor was it made for a 'prison'. Instead they have perverted the technology's original intent and that is the reason the program is failing.

The High decides to fly to the edge of the program and plummets back to the ground at a high rate of speed turning himself into a living bomb. The impact eradicates the city and causes everyone trapped in the program to awaken inside Bunker One.

Having watched the events ended in the simulation, Hotfoot went back to the awakened and gathered heroes and villains, who are all confuse of what had happened. Redeemer still thinks The High is the villain, but when The High awakens he tells them that killing them is what saved them. He then pulls Sergeant Stringer from his stasis tube and forces him to tell The Paladins the amount of time they've been in stasis. The Paladins are shocked to find out it's been sixty-three years since they were first introduced into the program. Hotfoot discovers all of their old costumes and weapons in the bunker. Sergeant Stringer reveals that all their items were kept because every superhuman in the program was viewed as a weapon that could be used at any time if the need presented itself.

Noticing that Engine Joe isn't present, Mago coerce Stringer into leading to where he is, and the group find their way to the bunker's motor pool and rejoin with Engine Joe, who then informs them that Dr. Sin have earlier escaped. Outside the bunker, The High leaves the others and intercepts a plane on its way to the bunker that's carrying a nuclear warhead. He dispatches the plane and takes the warhead with him into space. He then proceeds to throw the warhead at Skywatch III which is presently under construction. The station's force field takes the brunt of the impact and Jackson King, who is aboard, recognizes that The High is responsible. The High wastes no time and begins throwing asteroids at the station. King calls for The High to come aboard to explain himself.

The Authority arrives at the site of the bunker after having previously detected the number of metahumans there. After arriving, they found the dead bodies of the strike team and investigate the surroundings. Suddenly, they are then confronted by the Paladins, in which Midnight Rider kicks Midnighter, whom they mistake The Authority as government assassins and begins to engage them.

Back at the Pentagon, General Somerset makes a phone call to the President and informing him that he has dispatched the Reapers in containing the situation and assuring that it will "all be over soon."

Retrieved from "https://heykidscomics.fandom.com/wiki/Number_of_the_Beast_Vol_1_6?oldid=1568103"
Community content is available under CC-BY-SA unless otherwise noted.