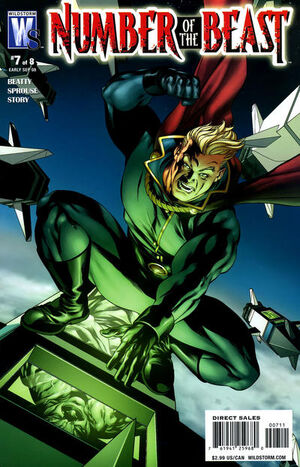 In 1945, a Daemonite spacecraft crashed landed in Nevada's Black Rock Desert. General Zebulon McCandless and the United States Army have already arrive on the scene. McCandless personally compares the spacecraft to the star Wormwood from the Book of Revelations as a sign of the "End Times". McCandless then states to an officer on planning to have the spaceship leave where it is and buried. This was the beginning of the Number of the Beast program.

In the present, Jackson King uses his telepathic abilities to help The High understand everything that's happened after his attack on Skywatch. He shows The High that after his supposed death, his genetic remains were recovered by the American government and used for a clone army of super soldiers based on notes from Dr. Jacob Krigstein. This army would act as a last resort for the government to prevent end of the world scenarios involving superhumans. Though many of the experiments suffered many costly setbacks, the United States Army Corps succeeded in the process under the "Reaper Initiative", creating weaponized multiple clones known as the "Reaper Ballistic Missile Arsenal", or Reapers. After having finished with The High's remains, the government had no where else to put him but inside the Number of the Beast program where they thought he could be kept safely. And since the Paladins have escape from their prison, General Somerset have launched the Reapers in response, in which The High senses them.

Somerset and the Daemonite Slyxx observes the battle between The Authority and the Paladins. In the midst of the conflict, Jenny Quarx and The Doctor explore the NOTB bunker in looking for answers and finds a brain damaged Lieutenant Welles.

Jackson continues to use his telepathic powers to further uncover the mystery behind Number of the Beast through the mind of a retired McCandless. He discovers that McCandless had been over-zealously believed in the end of the world and he orchestrated the disappearance of Earth's generation of heroes (such as the Paladins) and kept them asleep through Daemonite technology in order to keep them ready for the Apocalypse

As The Authority and the Paladins continue their battle, while some have already realize their error and decide to sit it out, The Doctor have easily healed Welles. Recovered, she tells them that if the bunker has been breached then the Reapers will have been activated.

On Skywatch, The High decide himself in stopping the Reapers, while ignoring Jackson's insistence of having only Stormwatch to handle the situation, and immediate flies to his clones. The High engages the missiles and attempts to stop them, but unsuccessfully. Jackson telepathically contacts him and reasons that the only way to stop the Reapers is to find and stop their source, as the Reapers are controlled by General Somerset and others at the Pentagon.

As The Doctor and Jenny Quantum discuss ways to end this, Lieutenant Welles reveals to them that the Reapers have a fail-safe that causes them to explode. As Welles flee back inside the bunker for safety, The Doctor strongly suggest of having everyone retreat to the Carrier, in which both The Authority and the Paladins are then teleported through to the Carrier's Shift-Doors.

Back in 1945, the military are constructing the NOTB facility over the Daemonite spaceship. McCandless was brief on the ship's stasis tubes and greets a Daemonite survivor that is being held a prisoner.

In the present, outrage of the superpowered beings absent from the bunker, Somerset then orders the Reapers into finding the Carrier. The Reapers then change a single Reaper into a gateway to the Bleed.

On the Carrier, the Paladins are being contained on the shiftship. Mago then remembers about Zebulon McCandless and plans on having a "talk" with him. The Authority then introduce themselves to the Paladins and informs them of the current situation. Suddenly, the Reapers breach and board the Carrier.

Retrieved from "https://heykidscomics.fandom.com/wiki/Number_of_the_Beast_Vol_1_7?oldid=1568104"
Community content is available under CC-BY-SA unless otherwise noted.