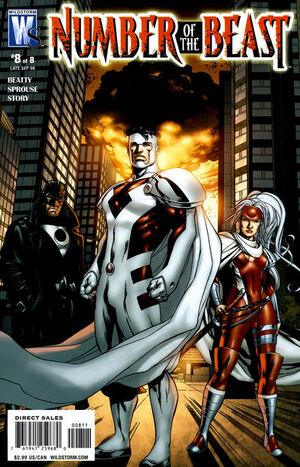 The planet's off its axis. But with the equivalent of a hundred nukes detonating in elliptical orbit, it's a wonder Earth isn't tumbling toward the sun. And the moon? Well, just look out the window. Cities are burning or flooded or both. Casualty estimates are at or above ninety-percent of global population pre-Armageddon. Europe is blanketed in darkness. The tropics are experiencing an ice age. And with all the radiation drifting down, the ozone layer may as well be cheesecloth. It's every extinction-level event rolled into one tidy little apocalypse. And let's not forget the 666 plus-or-minus "forgotten" post-humans running around loose and very likely pissed off at the present state of affairs. It all happened so fast...

In a flashback of the day of the nuclear bombing of Hiroshima in 1945, General Zebulon McCandless recalls of Robert Oppenheimer's quotation of the Bhagavad-Gita: "I am become death, the destroyer of worlds." In the NOTB base, Zebulon wonders if Oppenheimer ever wonder about the End Times as the Paladins are unconsciously transferred into their containment and installed into the virtual-reality system. Zebulon is then confer to the perfect timing of the teleportation of the Paladins and the other superpowered beings at Hiroshima and consults with the Daemonite Slyxx about the system being used to train the heroes to "save the world."

In the present, the Authority and the Paladins team-up in stopping the Reapers. In the conflict one of the Reapers have breached the Carrier's core engine, in which the caged infant universe is going critical in destroying the universe. The Doctor and Jenny Quarx hurriedly arrive to the engine room. From here, Jenny states to the Doctor that she will contain the baby universe by absorbing it much to the Doctor's chagrin. Before she does this, Jenny kiss goodbye to the Doctor, telling him that should she return he should find her and tell her how it all turned out as she apparently fades away. Without the caged universe, the Carrier emerges from the Bleed and crashing into London, England after the Doctor has done his efforts in preventing the shiftship from falling. Before going unconscious from exhausting his powers, the Doctor summons the Carrier's shift-doors in randomly teleporting the Reapers and the other heroes around the world in order to prevent any further damages to the Carrier.

At the NOTB bunker in Nevada, Lieutenant Welles manage to escape from the single Reaper, who was used as a gateway for the other Reapers to the Carrier, by utilizing Aeronaut's jetpack before it explode in a nuclear explosion.

After the moment the Reaper exploded, General Somerset is distressingly confuse as to why that single Reaper explode itself too soon given that sixty minutes aren't up for their intended self-destruction, and why it didn't instead go after the "post-humans". A scientist explains to him that the "gateway mode" that access the other Reapers to the Carrier that was in the Bleed compromised the Reaper's programming. He then fears the worst that the Reapers, being acting as a sort of hive mind, are also compromise from their original programming and are out of their control. Suddenly, The High crashes into the Pentagon, and demands Somerset in how to stop his clones. The general explains to him that he and the others couldn't deactivate them and that they are already "going off". The High then demands what he means in which Slyxx explicitly reveals to The High of what the general means is that if the Reapers couldn't entirely get rid of all of the world's post-humans, then they will "take them all with [them]", even in the course to destroy the world.

From around the world, the Paladins and other heroes are fighting in their best efforts against the Reapers while suffering casualties: Urumi's left arm is torn off, Falconnette is dead while being mourn by Thrush, and Hotfoot sacrifice himself in destroying a Reaper by phasing through him. In Hawaii, Majestic fights off a single Reaper which Majestic tries to reason with it, who he thinks is the real High. But the clone suddenly and strangely flies away, much to Majestic's confusion.

After disgusted in hearing from Slyxx's information, The High toss away Somerset and departs in stopping the Reapers before swearing to the general that he will punish him and others who were responsible for the NOTB program. Somerset tries to rally his people to notify Washington but then notice that Slyxx has murdered everyone. The Daemonite then explains to him that he has just left a message to his (Daemonite) superiors with the words, "mission accomplished".

In Skywatch III, StormWatch is unable to teleport to the battle scenes over the Earth due to the electromagnetic chaff in the thermosphere cause from the posthuman battles between the Reapers and Earth's heroes. Out in space, they see the Reapers are circling around the Earth. Suddenly, The High engages one of the Reapers and in the process taking a huge chunk out of Earth's moon. he High continues his battle in vain as the Reapers reach their activation point and simultaneously detonate.

Massive devastation ensues across the world. The Earth is thrown off it's axis and much of the surface is scorched by the blast. Roughly ninety percent of planet's population is gone. Europe is blanketed in a cloud of darkness, the tropics are stuck in a new ice age, and radiation seeps down through the atmosphere.

Observing the planet's devastation from Skywatch III, Jackson King informs to StormWatch of rallying their best abilities in saving what is left of Earth. In the ruins of Los Angeles, the Wildcats learns that this event isn't far from over and focus their concerns in keeping Majestic, who is relieving rescue efforts in a winterized Hawaii, sane before he succumbs to the maddened state Nemesis saw of him in the future. In Wyoming, Engine Joe, Mago, and Tumbleweed has tracked down Zebulon McCandless by tracing the signatures of Mago's watch that was gifted to him by Zebulon, and as well for Engine Joe to discover that the old woman that he failed to save before in the NOTB simulation was Zebulon's mother ("fed to the Beast, too"). The three then finds him in a bomb-shelter in his home while quoting the Bhagavad-Gita. Engine Joe informs him that he and others that were associated with the NOTB program will be held accountable for what had happened to the world.

In New York City, The High sits upon the Statue of Liberty while watching New York being engulf by the Atlantic Ocean. The High is joined by the Eidolon, who tells him all this had to happened. In which he alludes that the world's heroes and villains will still influence the world and its future. The High then wonders about their roles for the cataclysm: The High a "villain" for his debacle with The Changers that lead to the creation of the Reapers and Armageddon; and the Eidolon, stating himself being the creature of death who felt and enjoyed the deaths that is happening around the ruined world. Disgusted and hearing enough of the Eidolon's view of the current situation, The High then proceeds to grab him and throws him screaming into the horizon.

Retrieved from "https://heykidscomics.fandom.com/wiki/Number_of_the_Beast_Vol_1_8?oldid=1469504"
Community content is available under CC-BY-SA unless otherwise noted.