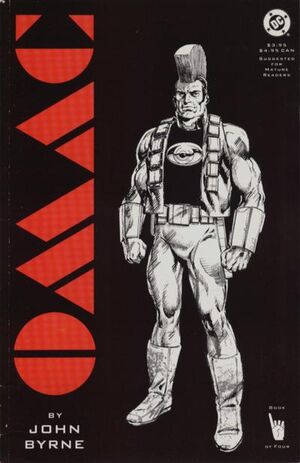 I am the One Man Army Corps. I was not created to think, to doubt. Only to act. Only to kill.

After fulfilling his longtime foe's request for a mercy kill, O.M.A.C. is soon told by the Global Peace Agency that a more sinister plot is unfolding. Mister Big did not die by his hand as he previously thought, but has somehow slipped through time and is now inhabiting a much younger, and stronger body.

Retrieved from "https://heykidscomics.fandom.com/wiki/OMAC_Vol_2_1?oldid=1444771"
Community content is available under CC-BY-SA unless otherwise noted.