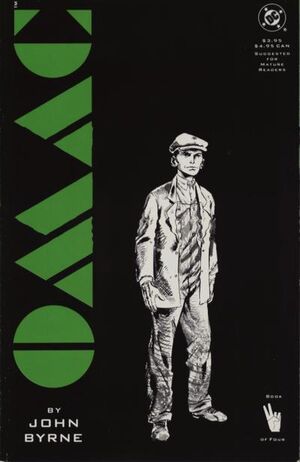 Appearing in "Brother, Can You Spare an Eye?"Edit

Synopsis for "Brother, Can You Spare an Eye?"Edit

O.M.A.C. travels through time to locate his longtime foe, Mister Big. When he's transported to New York City on October 9, 1929, he's unfortunately transformed back into the weak Buddy Blank and now has amnesia.

Months and years go by and Buddy marries the officer's daughter. During their marriage, Buddy has assimilated into daily life as a lowly dockworker. Meanwhile, his recurring nightmare of "O.M.A.C." continues to baffle him, until he seeks employment at Jason Bigello's factory.

When he steps into Bigello's office, Buddy does not know his new boss is really Mister Big in a younger body, but Bigello/Big quickly realizes that Buddy is O.M.A.C. -- his indestructible enemy.

Big has two of his henchmen apprehend Buddy, tie him up and torture him. Buddy continues to be baffled about them believing he's really O.M.A.C., and thus never confesses to knowing anything. Feed up, Mister Big takes the bloodied Buddy to the docks to finish him off for good.

Retrieved from "https://heykidscomics.fandom.com/wiki/OMAC_Vol_2_2?oldid=1491576"
Community content is available under CC-BY-SA unless otherwise noted.