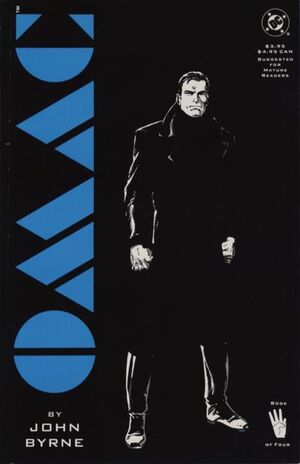 Brother Eye... are you sure this is the target? But he seems so... small. This is the man who cast such a long shadow across the face of the world?

Mister Big has apprehend Buddy Blank, tied him up and tortured him. Since Buddy continued to be ignorant about being, or knowing he's really O.M.A.C., Mister Big takes the bloodied Buddy to the docks to finish him off for good.

As the henchmen are about to kill Buddy, Brother Eye has finally located him and changes Buddy into O.M.A.C., thus causing one thug to die in the "explosive" switch and others to scatter. While O.M.A.C. searches for his captors, Brother Eye informs him of Mister Big's ties with Adolf Hitler and instructs him to go to Germany and kill the ruthless dictator.

O.M.A.C. does just that and succeeds in murdering the Fuhrer. After the mission, Brother Eye updates Buddy's memory transference. Both soon realize that Buddy has been a "civilian" for ten years and has a wife. The pieces begin to fit together and Buddy is now aware that Bigello is really Mister Big and his wife could be in great danger.

Retrieved from "https://heykidscomics.fandom.com/wiki/OMAC_Vol_2_3?oldid=1444773"
Community content is available under CC-BY-SA unless otherwise noted.