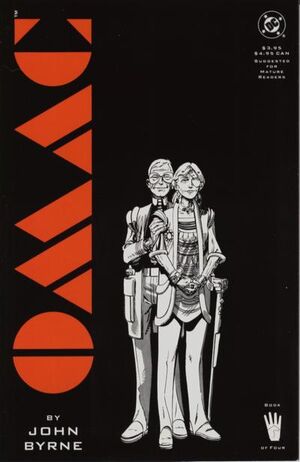 Appearing in "The Man Who Made Tomorrow"Edit

Synopsis for "The Man Who Made Tomorrow"Edit

1939: When Brother Eye updated Buddy's memory transference. Both soon realized that Buddy has been a "civilian" for ten years and has a pregnant wife. With the pieces fitting together, Buddy is now aware that Bigello is really Mister Big and his wife is in great danger.

Meanwhile, Mister Big has kidnapped Buddy's wife, tortured her and keeps her captive in his home. O.M.A.C. comes to the rescue and takes her to the hospital. Once she's settled in her room and healing from her wounds, O.M.A.C. pays her a visit. The two talk and she requests that O.M.A.C. change back to the "Buddy" she knows. He does, and collapses with fiery pain. At that moment, Mister Big enters the room threatening to kill both of them. However, Buddy's wife won't stand for this and kills Big by smashing a chair over him -- again, and again. Doctors rush in and take Buddy to the emergency room and then... everything goes BLANK!

1991: O.M.A.C. explains to Brother Eye how he and Mister Big were trapped in a cycle and that his life as "Buddy Blank" was part of a fifty-year time loop. None of this makes sense to Brother Eye.

O.M.A.C. continues his explanation and clarifies that it was he who contacted the Global Peace Agency after he killed the elder Mister Big[1] with his bare hands. He suggested that the agency search for a "Myron Forest" of a different time line, an thus create another Brother Eye and O.M.A.C.

It was Buddy's "different" version who traveled back in time so that he could in essence live a full life and die, ending the cycle and taking that Brother Eye and O.M.A.C. into the oblivion of non-existence.

Retrieved from "https://heykidscomics.fandom.com/wiki/OMAC_Vol_2_4?oldid=1444774"
Community content is available under CC-BY-SA unless otherwise noted.