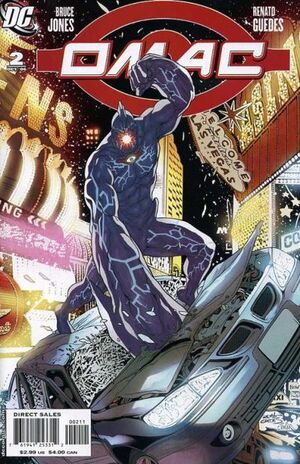 The last OMAC managed to escape Firestorm - now he finds himself in Las Vegas, but still with a deadly mission to complete at the heart of the United States' military. Success in this mission will unleash an even greater danger, but what chance do any of Earth's heroes have against the One Man Army Corps?

And while the man who has become OMAC is far from the war machine that is OMAC, what hope does he have to prevent freedom's downfall when he doesn't even know the menace he carries inside him?

Retrieved from "https://heykidscomics.fandom.com/wiki/OMAC_Vol_3_2?oldid=1444776"
Community content is available under CC-BY-SA unless otherwise noted.