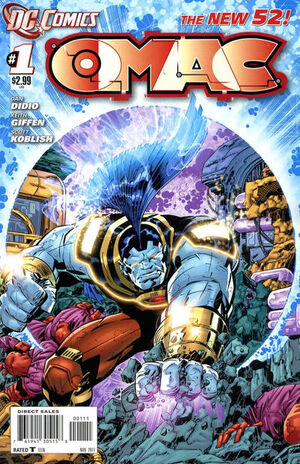 Appearing in "Office Management Amidst Chaos"Edit

Synopsis for "Office Management Amidst Chaos"Edit

Lord Makkari and Dubbilex attempt to stop Brother Eye's weapon, O.M.A.C. (Kevin Kho), from reestablishing contact with Cadmus Industries' mainframe. They are unable to prevent O.M.A.C. from completing the instructions he receives from Brother Eye and BE teleports him out. Lord Makkari swears this is far from over. Kevin Kho is unaware that BE has transformed him into O.M.A.C. The last thing he remembers is standing in the men's room. BE tells him to call his girlfriend as she is worried about him.

Retrieved from "https://heykidscomics.fandom.com/wiki/OMAC_Vol_4_1?oldid=1661070"
Community content is available under CC-BY-SA unless otherwise noted.