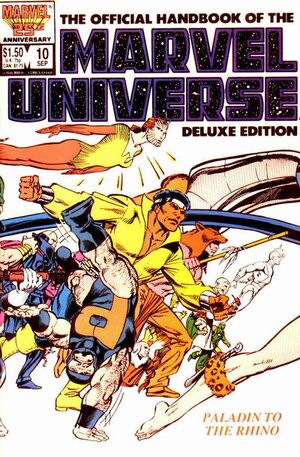 The Purple Man has an entry in this 1986 issue. He later had another entry in issue #19 (December 1987) as a part of the "Book of the Dead". The Purple Man died in Emperor Doom, published in 1987 - but other characters who died in that period (e.g. Kraven the Hunter) did not have two entries in OHOTMU Vol 2.

Retrieved from "https://heykidscomics.fandom.com/wiki/Official_Handbook_of_the_Marvel_Universe_Vol_2_10?oldid=1449053"
Community content is available under CC-BY-SA unless otherwise noted.