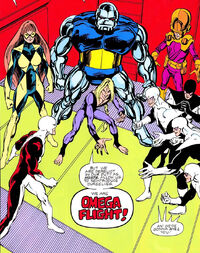 Omega Flight was formed by Jerome Jaxon in his attempt to both kill James MacDonald Hudson as well as destroy Alpha Flight. His aassistant, Delphine Courtney recruited former members of the original Beta and Gamma Flight and manipulated their emotions to get them to join. During the first encounter between the two teams, both Jaxon and Hudson were killed (though it was later revealed that Hudson was not killed). The members of Omega were imprisoned though Delphine escaped with Jaxon's body.

Omega Flight surfaced again later when Delphine was impersonating Hudson having returned from the dead. They faced, and defeated half of Alpha Flight, but when Delphine accidentally released an inter-dimensional nexus from Shaman's pouch. However, as they fled the nexus, they ran into Mr. Jefferies who was able to stop them.

Equipment: Delphine used a machine that could influence the emotions of others to encourage compliance from the members of Omega Flight.
Transportation: None known.
Weapons: None known.

From Marvel Database, a Wikia wiki.

From Marvel Database, a Wikia wiki.
Retrieved from "https://heykidscomics.fandom.com/wiki/Omega_Flight_(Jaxon)_(Earth-616)?oldid=1680735"
Community content is available under CC-BY-SA unless otherwise noted.