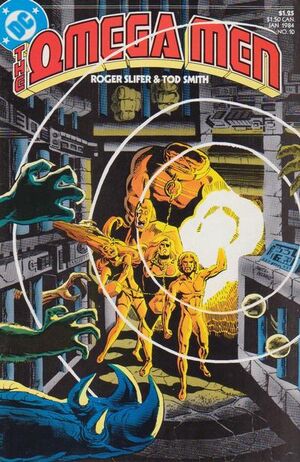 Look, all I want is a small empire. Let's just split Vega down the middle!

Lobo brings the remaining fugitive Omega Men to a prison planet run by the Citadel. Harry Hokum is content with simply disintegrating the lot of them, but the Citadel commander wants to savor their pain. Once inside, the Omega Men are marched down one of the numerous prison blocks. Suddenly, the Omega Men break free of their bonds. It was all a ruse. Lobo is actually working alongside the Omega Men in an effort to rescue their captured allies. Harry Hokum presses a switch that releases a pack of Ravagers. The vicious animals pounce on the Omega Men and even their own various powers are not enough to keep them at bay. Broot, still haunted by his recent experiences, is reluctant to raise his fists, even to defend himself. Lobo encourages the Changralynian by planting the idea that the ones responsible for ordering the death of Broot's child might reside inside this facility. Brute finally unleashes his anger and begins battering the walls until his fists smash through to an adjacent passageway. The Omega Men scramble into the tunnel to escape from the Ravagers.

The tunnel leads them to the prison's command center where the Citadel commander and Harry Hokum have Tigorr suspended from a torture device. Primus uses his telekinesis to unseat the Citadel commander, bringing him down to their level. Harry activates a laser grid, but the Omega Men have come prepared for just such a trap. Each of them is fitted with a personal force shield designed by Euphorix's Alonzo Dulak. Lobo disconnects an explosive device from his belt and gets in close to the Citadel commander. The device explodes and the commander is killed. Primus extends his force shield to protect Lobo from the blast.

Harry Hokum, in a bid to consolidate his power proposes a deal with the Omega Men. Now that the commander has been killed, Harry is the highest ranking member of the old Citadel Empire. He suggests that Primus and he should split the territory of the Vega star system between them. After some deliberation, Primus agrees, but with the caveat that Hokum's Empire may only include worlds that join with him of their own free will. All others will be invited to join the New Vega coalition. Hokum agrees and a broadcast is sent out to the various races within the Vega star system. Surprisingly, several worlds voluntarily agree to become part of the New Citadel Empire, including Broot's home world of Changralyn. Just as many however, decide to align themselves with Primus.

After solidifying the deal, Primus receives a message from Kalista on Euphorix. Unwilling to risk any further invasions to her world, she is erecting the planetary shield permanently. Once this is done, nobody will be able to enter or leave Euphorian air space. Primus is left with a choice: Stay and help rebuild the coalition of free Vegan worlds, or return to the world of his birth.

Retrieved from "https://heykidscomics.fandom.com/wiki/Omega_Men_Vol_1_10?oldid=1500835"
Community content is available under CC-BY-SA unless otherwise noted.