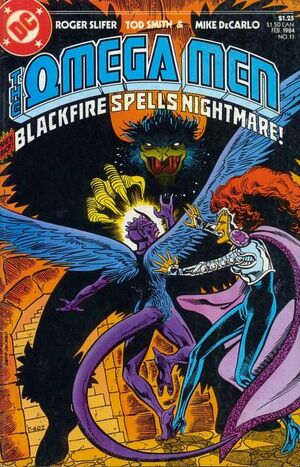 As I promised, you space-wags, you shall each get what you want. Just choose your mate. Technology will do the rest!

Appearing in "Of Vice and Virtue"Edit

Synopsis for "Of Vice and Virtue"Edit

The Omega Men bring Harpis to the world of Rashashoon. Harpis has suffered a sever nervous breakdown due to her injuries as well as learning that her sister Demonia had been killed. Prior to becoming the winged warrior, Harpis spent a great deal of her youth working at a bordello in the city of Raggashoon. The bordello's mistress Mama Madame greets the Omega Men and Harpis is hooked up to a neural stabilizer. Mama Madame uses a process known as a Psycho-Drama in an effort to heal Harpis' psychological scars. The Omega Men witness the visual display and learn a great deal about their teammate's past.

While still humanoid, Harpis and her older sister Demonia came to Raggashoon many years ago to work as professional companions. hey were both thrilled with the prospect of earning wealth and power and living in the sort of opulence that only Mama Madame could provide. Harpis found herself highly suited to most of Raggashoon's clients and became one of Madame's most popular providers - even more so than her jealous, yet protective sister Demonia. Although Mama Madame usually catered to clients loyal to the Citadel, she also provided companionship to various revolutionaries. During these years, Harpis had relations with the Karnan Tigorr, as well as Tigorr's second-in-command Delengis Jarouq, the latter of whom she fell deeply in love with. Such attachment was strongly discouraged amongst those under Mama Madame's charge and it was made all the worse by the fact that Jarouq was a revolutionary.

One evening, a high ranking Citadel leader, Komand'r of Tamaran, came to Raggashoon to find suitable mates for her troops. Harpis and Demonia were both selected, but Komand'r was not content with simply hiring them for an evening. She had both women undergo drastic genetic modification so that they would be physically alluring for their selected mates. Demonia was transformed into a serpentine woman whose visage reflected her twisted heart. Harpis was turned into a winged bat-like creature with claws and a tail. While Demonia embraced her new appearance, Harpis was horrified. Komand'r would often times have the women present at battle sites so they could witness their mates in action. Harpis was present when Komand'r's forces fought against Tigorr's revolutionaries at the Battle of Tamaran. Seeing her lover Delengis Jarouq present on the field, she could no longer sit idly by and do nothing. She fled from her keepers and joined the ranks of the revolutionaries. The revolt failed, and Harpis was sent to a prison planet along with Delengis and Tigorr.

While in prison, Harpis learned that another band of revolutionaries led by the warriors Primus, Broot and Kalista had staged a breakout. This incident exploded into a violent firefight and where it was believed that Jarouq had been killed. Free from captivity, Harpis, Demonia and Tigorr joined with Primus' team to form the Omega Men.

As the rest of the Omega Men keep vigil over their comrade, a strange visitor enters the room - Delengis Jaroug. He had actually survived the original attack, but is now a cyborg.

Retrieved from "https://heykidscomics.fandom.com/wiki/Omega_Men_Vol_1_11?oldid=1533035"
Community content is available under CC-BY-SA unless otherwise noted.