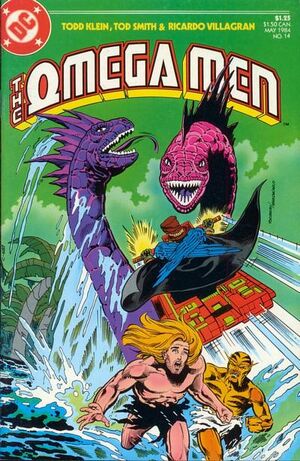 I want you to know you're the most conceited, inconsiderate, nasty son-of-a-kit I've ever met.

On the Omega Men mothership, Tigorr engages in drink and revelry with his crew mates. He regales them with tales of bravery and heroism. After taking a respite from his audience, Tigorr is shocked to find team leader Primus, drunkenly seated at the back of the lounge. Primus begins mewling about his lost wife Kalista, and his ineffectiveness as a hero. He also confesses to Tigorr that his psionic powers have not been operating at full capacity ever since the Gordanian attack on Changralyn that cost him his eye.[1]

Back on Rashashoon, Harpis awakens, but she is still delirious and in great pain. She doesn't even recognize her old lover Delingis Jarouq whom she believed had been killed during a prison breakout many yeas ago.[2] Mama Madame and Doc try to hold her down and the rush her into a medical bay.

Some time later, Tigorr and a hungover Primus take a shuttle craft to Tigorr's home world of Karna. Tigorr wants Primus to forget the events of the past several days, and hopefully regain some margin of self-esteem. The bounty hunter known as Bedlam tracks their ship and blasts them as they enter Karna's atmosphere. Tigorr pilots the limping ship to ground where it crashes. Bedlam puts on a cape adorned with the amputated wings of the injured Harpis and mounts his sky-sled in search of the fallen Omegans.

On Rashashoon, the medics work feverishly to repair Harpis' injuries. They submit her to a bizarre series of procedures, but her pain and torment is so great that she tries to break free.

Back on Karna, Bedlam begins his hunt for Tigorr and Primus. He is still miffed that Tigorr escaped his clutches during the assignment wherein he first encountered the Omega Men.[3] The chase brings both parties across the great expanse of the Karnan wilderness where they are set upon by various examples of the planet's predatory wildlife. Suddenly, the wings on Bedlam's cape begin to twitch. Somehow, Harpis is psionically summoning her wings back to her. As the wings take flight, the sudden movement causes Bedlam to lose his balance and he falls into a ravine. He survives being eaten by random creatures, but shakes his fist in defiance, swearing that he will get his revenge upon the Omega Men.

Soon after, Tigorr and Primus meet the Supreme commander of Karna's military fleet. Primus learns that Tigorr is something of a trouble maker amongst his people. One of his more notable offenses is that he stole an entire squadron of Karnan fighter ships and assumed the title of commander during the Great Wars against the Citadel. His transgressions are forgiven however when Primus explains how Tigorr was single-handedly responsible for bringing an end to the Citadel War by destroying their planetary nerve center.[4]

Retrieved from "https://heykidscomics.fandom.com/wiki/Omega_Men_Vol_1_14?oldid=1455464"
Community content is available under CC-BY-SA unless otherwise noted.