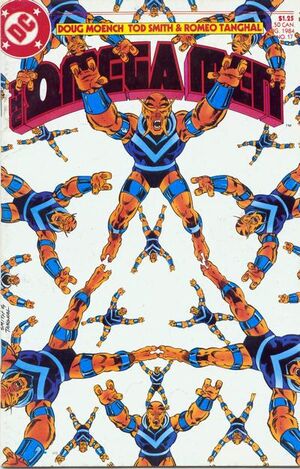 There's nothing in this cave. Let's get back to -- Shlagen? Where are ya, you spineless lump of quivering jelly?

On Raggashoon, the Omega Men keep watch over Harpis who is still recuperating from her wounds. Felicity suddenly suffers a bizarre seizure and begins rambling. Doc examines her and determines that she is experiencing a telepathic distress call. The Omega Men triangulate the origin of the distress call and fly off to check it out.

On Euphorix, Alonzo Dulak is placed on trial for his involvement in the "Crisis of the Shield". Kalista presides over the hearing, but her thoughts are elsewhere. She inadvertently agrees with a judiciary panel that sentences Dulak to permanent exile from Euphorix.

The Omega Men land on the asteroid and begin exploring. They split into teams of two and Tigorr is reluctantly partnered with the quivering Shlagen. Tigorr accidentally activates an ancient Psion experimental device and suddenly begins replicating. Little by little, more doppelgangers of Tigorr begin to appear. The Omega Men do not know which one to trust. All of the Tigorr's are prey to their predatory instinct and begin attacking one another. The Omega Men, still confused, do not know which one to help.

Retrieved from "https://heykidscomics.fandom.com/wiki/Omega_Men_Vol_1_17?oldid=1500841"
Community content is available under CC-BY-SA unless otherwise noted.