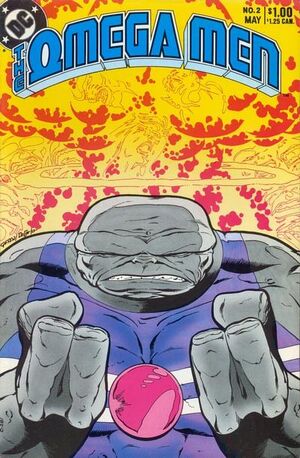 Appearing in "The Sacred and the Profane!"Edit

Synopsis for "The Sacred and the Profane!"Edit

The Omega Men pick themselves up from the ruins of Sharll. All around them are bodies of innocent Changralynians partially buried beneath tons of smoldering debris. The surviving members of the planet blame Broot for the holocaust.

On the Omega Men mothership, Kalista forces a captured Citadelian to transmit false reports to his commander. Demonia meanwhile, begins to sew seeds of mistrust within the lower ranks. She warns some of the underlings about Primus' apparent mind-control capabilities.

Back at Sharll, the Omega Men realize that their bio-systems are nearly depleted. Tigorr volunteers to gather some more, but Primus warns him that his system will burn out long before he has the chance to replace it. Tigorr ignores Primus' warnings and storms off. Though it nearly costs him his own life, Tigorr proves triumphant and he returns to Sharll with fresh bio-systems.

Meanwhile, the supreme commander of the Citadel prepares to bomb the protective shield surrounding Euphorix – the last independent world in the Vega star system.

Retrieved from "https://heykidscomics.fandom.com/wiki/Omega_Men_Vol_1_2?oldid=1455452"
Community content is available under CC-BY-SA unless otherwise noted.