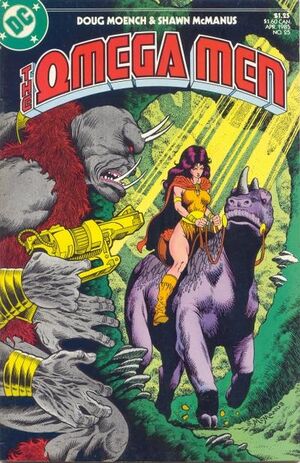 The palace belongs to a dead past, Sherilla -- and will soon collapse in ruins if something is not done.

Appearing in "Arbor of Enchantments Lost"Edit

Synopsis for "Arbor of Enchantments Lost"Edit

Kalista reminesces over her childhood on Euphorix and learns that Alonzo Dulak is in love with her, but doesn’t suspect Harry Hokum is setting her up for assassination.

Retrieved from "https://heykidscomics.fandom.com/wiki/Omega_Men_Vol_1_25?oldid=1455475"
Community content is available under CC-BY-SA unless otherwise noted.